As the new musical ad declares, Macs are as useful as a hat for your cat. Is it true? Both have keyboards and SSDs for storage, both have touch screen…. Oops! Wait-wait-wait, Macbooks don’t have touch screens? Really? Oh, boy, we’re well into the second decade of the 21st century, for crying out loud! Yes, sad but true. Macbooks are only rumored to get touch screens in the future.

A Hat for Your Cat

How about stylus? No chance. You can write and draw with a stylus only if you’re a happy owner of Surface Pro 4. Just rip away the keyboard if you choose to use Surface Pro 4 as a tablet and when you’re bored of it, glue it back. Yes, it has magnets. It’s just that simple.

Windows Surface Pro 4 sports faster Intel Skylake CPU as well. It’s 50% faster than that in Macbooks. Apple’s Intel Core m7 against Microsoft’s Intel Core i5, a mobile chip against the desktop level chip. With a Surface Pro 4 you’ve got a portable PC, compact enough to fit into a bag. With or without the keyboard, remember.

What makes this tablet so great is that it is a part of the Windows ecosystem. No synchronizing with your desktop any more. The docs interchange is smooth and elegant. Of course, Microsoft here is lagging behind, for Apple has long since launched their own ecosystem. Hell, they invented it! But Apple sticks to entertainment segment with iPads, while Microsoft has working goals in mind.

Who is the target group for the Windows Surface 4 Pro? Freelancers, part-timers, graduates and post-graduates, in other words, people who aren’t confined to one place, one office, one job. Laptops are great, but they have their limits. For example, you have to find place for the keyboard. It can be slim but can’t be narrow. On the other hand, iOS and especially Android tablet lack the native office software, compatible with the Microsoft Office pack. We all love Apple, to God, they have their hallmarks, but the world runs on Word, Excel and PowerPoint.

And what’s more, the Windows Surface 4 Pro features the paramount security system. iPhones and iPads sport the fingerprint reader; Microsoft has tossed in the facial recognition for good measure. The infrared cam is reported to work well in any lighting condition: in the sunny park and in the dark room. While Windows powered desktops asks for the password every time you power them up or wake from the sleep. And typing that in takes up time and, let’s be honest, is dead boring. Besides, if you forget your password, you’ll need another PC to get an access to your Microsoft account and reset the password. With the facial recognition it can only take place if you have undergone facial surgery, which is not the thing that happens every other week.

And the last but not the least argument. Windows OS. The options for software is literally limitless, and most of it has shareware versions. Plus, cloud Office and OneDrive cloud storage hit the sweet spot for working. Really, who needs laptops? 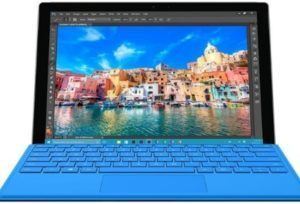