Bundled With: “Day One Edition” Xbox One Versions limited edition.

Available: with the pre-ordered console.

White controller: Inscription and/or Color: ” I MADE THIS LAUNCH TEAM 2013″ (for employees bundle only).

Available: to Microsoft employees on the release of Xbox One.

Bundled With: Xbox One.

Special Features: All three controllers were re-issued with the revised 3.5 mm headset jack.

Forza Motorsport 6: Inscription and/or Color: dark blue with a ‘fast stripe’ down the center to copy the Ford GT pattern.

Bundled With: Xbox One special edition in matching colors, inspired by the in-game R-101C carbine.

Available: to Respawn Entertainment employees only.

Bundled With: Call Of Duty game.

Connect your Controller with the Console’s Connect Button

Connect Your Controller with the USB-to-Micro USB Cable

If you don’t have charged batteries, you can plug your controller to the console with the USB-to-micro USB cable from the MICROSOFT Play & Charge Kit or from any third-party manufacturer. Thus your wireless controller is turned into the wired one and you can play without batteries, as the gamepad is powered by the console itself. 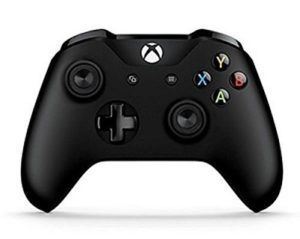