This is the proprietary HDMI adapter for sharing photos, video, and presentations on larger screens. The adapter is designed for the Surface tablets line-up but can be used with any laptop featuring the Mini DisplayPort port. The wire is long enough and robust.

Specifications of the Mini DisplayPort to HDMI Adapter

Users report say, this adapter won’t support anything higher than 1080p and won’t work with Surface Dock. Besides the HDMI connector is of very poor quality and lags on the screen. It leads to intermittent disconnection. So, it will be hard to follow the point 1 of our Troubleshooting guide you can find below.

How to connect a Surface tablet or Surface book to an external display. It takes very simple steps:

While working with two displays you can send the window from one screen to another with a drag-and-drop either on desktop display or on the tablet. All you have to do is to drag the window to the screen’s edge. But here’s the trick what edge to choose.

For instance, you placed Screen 1 on the top and Screen 2 in the bottom. Then you are to drag the windows in the desktop display to the upper edge for it to appear in the tablet. If you tablet is placed in the right of the external display, drag the window to the right to get it into tablet and in the tablet – back to the left for it to re-appear on the larger screen.

Now and then you may face troubles while connecting the tablet to the external display. Here are some troubleshooting tips for you.

This is the proprietary Ethernet adapter for connecting your Surface to the Web or local network. It can be connected to the device via the high-speed USB 3.0 port and features a minuscule LED light to indicate the traffic. The Surface device can be plugged into net printers and servers. In Windows 10, version 1511 and later the drivers for Microsoft Surface Ethernet Adapters are present by default.

Specification of the Surface Ethernet Adapter

The Surface Ethernet Adapter can be given an own MAC address in the network. Considering this, every Surface gadget should have an Ethernet adapter each. Sharing one adapter between several devices will lead to mass confusion in the network.

This is possible because they feature the internal chip compatible with the Surface firmware.

To boot from the network or a connected USB stick, instruct the Surface device to boot from an alternate boot device fist. Alter the boot order or set the bootable USB device by default.

Here’s the step-by-step guide (do not try it unless you’re 100% sure you understand what you’re doing): 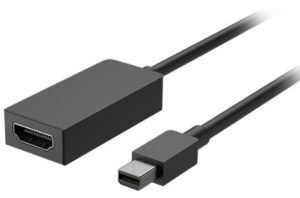