Universal Mobile Keyboard is the Bluetooth compact cross-platform keyboard-dock for portables. It features 68 keys, including 7 Hot keys and one Home key that brings a user back to home screen in Windows as well as in Android and, presumably, iOS. The hot keys include: Search, Mute, Volume +, Volume -, Play/Pause, Previous Track, Next Track. The keyboard can be paired with up to 3 devices and a user can toggle between them with a switch in the top right corner.

The dock can support devices of no more than 0.4-inch thickness at two angles: 45º and 30º approximately. The Universal Mobile Keyboard is powered with the rechargeable 300mAh Lithium battery. The USB – mini-USB charging cable arrives from the box. The keyboard is available in two colors: black and white. 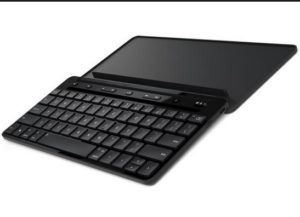