Windows Surface 3rd Gen (mid-2015) is the third tablet in the Surface line-up designed and manufactured by Microsoft. It’s a portable 2-in-1 computing device in a VaporMg seamless silver color casing with black bezel edges, a flip-out kickstand and a magnet lock for a detachable keyboard\cover. Windows Surface 3rd Gen has switched to Intel Atom processor and runs the latest Windows 10 OS. The aspect ratio has also been changed from 16:9 to 3:2. The screen supports 10 touches but no handwriting. It is slightly bigger than that of its’ predecessor and has higher ppi value. It also supports Bluetooth active pen and handwriting. Windows Surface 3rd Gen (mid-2015) features a 10.8-inch ClearType Full HD display, a quad core 1.6 GHz Intel Atom (x7-Z8700) processor, Intel HD Graphics, 64 GB \ 128 GB SSD aboard. The storage capacity can be expanded up to 200 GB with an SD card. Windows Surface 2nd Gen (late 2013) has an USB 3.0 with host support, 3.5 mm audio socket, 2 microphones, Dolby stereo speakers, Mini DisplayPort, one HD webcam in the front and one in the rear. This is a non-GSM tablet, but it has Wi-Fi 802.11a/b/g/n/ac, Bluetooth 4.0 for wireless connection. Windows Surface 3rd Gen (mid-2015) is shipped without a keyboard \ cover. The magnetic detachable Touch Cover 2 and Type Cover 2 and a Wacom N-trig Active are available for an extra cost.

Discontinued: Windows Surface 3rd Gen is due to the end of 2016. 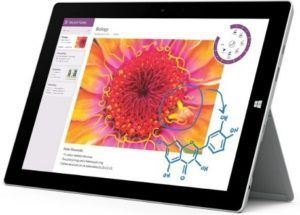