Touch Cover is an accessory for Microfoft Surface hybrid tablets. The keyboard is pressure sensitive with soft touch scissor-switch keys, a touchpad and a magnetic docking connection to attach it to the tablet. The keyboard can hang loose and won’t go. When it is folded back, the Surface detects no key pressure. Type Cover is available separately from Microsoft Surfaces.

A Few Words about Touch Cover

Touch Cover magnetically attaches to your Microsoft Surface tablet: To attach a Touch Cover to your Surface, just bring the two items close together until the Cover aligns and clicks into place. Once the Cover is connected to the computer, it stays put. When you want to remove it, just pull the Cover away.

Using Touchpad: All Surface Touch Covers have a standard keyboard, shortcut keys for common tasks, and a touchpad, which has right-click and left-click buttons, and supports gestures.

Using the keyboard and special keys: Surface Covers have shortcut keys for opening Windows charms, playing audio or video, and perform other actions. Keys on the top row double as function keys – hold down the Fn key while you press the key. Note that if you use function keys a lot, you can lock these keys in function mode. The Fn key also works in combination with other keys to do certain things.

Lock keys into function mode: Using an app that uses function keys a lot, it is possible to temporarily lock the top row of keys so the function keys stick. Here’s how to do this:

Use a mouse or disable the touchpad: If you prefer using a mouse to using the touchpad on your Type Cover, you can connect a USB or Bluetooth mouse.

Turn typing sounds on or off: Touch Cover and the touch keyboard can make a sound when you press the keys. Here’s how to turn the sound on or off:

To adjust the volume, use the volume button on the left side of your Surface. See Surface sound, volume, and audio accessories for more info.

Use different language Covers: Surface Covers are available for a number of languages and alphabets. If your Cover has a key marked Alt Gr, you can use it as you would Ctrl + Alt.

You can also set up your Surface to use specific languages and keyboard layout. These settings stay with your Surface and apply to any Cover you attach. If you use your Cover on a different Microsoft Surface tablet, the input methods set for that Surface will apply. 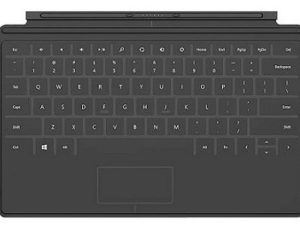