Microsoft Surface Pro 4 (Intel Core i5, Late 2015) is the mid-level iteration of the fourth gen hybrid tablets designed and manufactured by Microsoft. It is a Skylake powered hybrid with larger touch screen as compared to its predecessors and with better resolution. The water cooling system has also been thoroughly improved. The outer design remained the same: a VaporMg seamless casing with bezel edges and a flip-out kickstand. In the bottom there are a magnet lock and a pogo pin power connector to plug a detachable keyboard\cover\battery in.

Microsoft Surface Pro 4 (Intel Core i5, Late 2015) touch screen supports 10 touches and the handwriting with a Bluetooth powered Wacom digital pen. The tablet runs on mid-level dual core Skylake processor with a trusted platform module. That means, the processor is capable of encrypting data, especially, personal data, providing a higher security level. This iteration of Surface Pro has three iterations regarding the CPU installed, every iteration subdivided into several models with various SSD and RAM capacity. Surface Pro 4 features a 12.3-inch ClearType Full HD display, a 2.4GHz Intel Core I5-6300U processor, an Intel HD Graphics 520 graphic processor, a 128GB \ 256GB \ 512GB solid state drive aboard. The storage capacity can be expanded up to 200 GB with an SD card. Microsoft Surface Pro 4 has an USB 3.0 with host support, 3.5 mm audio socket, 2 microphones, 2 Dolby Digital Plus stereo speakers, a Mini Display Port 1.2, one full HD webcam in the front and one in the rear. This is a non-GSM tablet, but it has Wi-Fi 802.11a/ac/b/g/n, Bluetooth 4.0 for wireless connection. Surface Pro is compatible with accessories for previous models and shipped with a N-trig Active pen but without a keyboard\cover. The magnetic detachable keyboard\cover\battery is available for an extra cost.

Video uploaded by MobileTechReview on November 16, 2015. 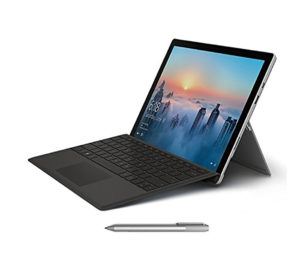