With Snapdragon 830, 2k display and 20 MP rear camera to feature the coming Surface phone, it’s obvious Microsoft bets on productivity. Snapdragon 830 is rumored to be the Qualcomm next generation processor with 10 nm manufacturing process, a quad core Kryo CPU, clocked at 2.2GHz and LDDDR4X RAM. According to the leak from China, the new processor will be able to support 8 GB of RAM – an unheard of capacity for cell phones.

No wonder, another leak from Baidu Chinese message board pictures Surface Phone propped in landscape orientation against a kickstand cover similar to that for Surface tablets. This may hint at unrivaled productivity of the much awaited portable, pitching it somewhere between Surface Pro 2-in-1 tablet and Surface Book.

The rumored screen diagonal size – 5.7 – also places the phone with phablets rather than phones. But with 2k resolution it’s unwise to make a smaller screen.

It’s unknown still, if it will be possible to plug the Surface Phone to a large display via Windows Dock Station as the HP X3 Elite cell phone, thus turning it into a desktop system, but it might inherit the connectivity from its Windows Surface “brothers”.

The release date also remains unknown. If Microsoft meets the expectations about this phone, it will be a serious pitch for Apple’s top place in the market. But back in January 2016, experts found out that Microsoft had purchased the domain name surfacephone.com (which redirects to Microsoft’s Surface page when accessed), and given the company’s actual naming conventions for its devices, it seems too obvious and logical that the Surface smartphone is finally coming (on the other side, the company may have purchased the name only to avoid being harassed by some unscrupulous competitors that would use the name to promote their products and so on.

Finally, let’s remind you that Microsoft began working on its first mobile phone as early as in 2004, when the company launched its highly publicized “Photon” project. The development however was too slow, a few problems showed from the very beginning and the project was ultimately cancelled, as the company considered that cancelling it would be the best solution. Three or four years later, in 2008, Microsoft relaunched its Windows Mobile group in order to design a new mobile operating system with the release date fixed for 2009 (under the name of Windows Phone). Once again a series of unexpected issues caused serious delays, and all this prompted Microsoft to develop Windows Mobile 6.5 operating system as an interim release. Unfortunately, this new OS was not compatible with Windows Mobile applications. Now Microsoft decided to look at the mobile phone market with a fresh look… And the world is still awaiting the results.

The exact release date is still unknown, and it seems nobody (except for may be Bill Gates) can’t say for sure when the long-expected Surface Phone is going to come out, but everybody knows that the suspense will last till this fall (2017). Do you remember that in November 2017, Microsoft CEO Satya Nadella admitted that Microsoft had missed the mobile boom. Mr. Nadella also promised that Microsoft’s “ultimate mobile device” was on the way. 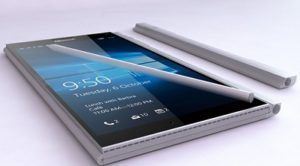