New All-In-One PC: Windows fans and haters have to circle the 26th of October in their calendars. As this is the date of annual event Microsoft presents new products, rumors have it, we’re going to meet the new OEM all-in-one PC under Windows 10 with Surface keyboard and mouse. Exactly how gossip mills derived that escapes me, but taking into account the lifelong competition between Microsoft and Apple, Myerson is a tad late, don’t you think? All-in-one PCs ceased being the hottest thing in town long time ago. Microsoft will have to roll out something really great to awe the audience.

Will Microsoft Present the New All-In-One PC This Fall?

In invitations this year Redmond is extremely vague. They promise “the next chapter in the Windows story” with no details whatsoever. So the eager users have to put the whole picture together piece by piece.

For instance, The Verge magazine reports, Microsoft doesn’t intend to develop further Surface Book and Microsoft Surface Pro 4 line-up. Windows 10, being promised to get three featuring updates annually, gets only two this year. Looks like they in Microsoft has pooled all the resources for launching something really new.

The greatest hopes lie with the patent filed earlier this year. A closer look reveals the new all-in-one desktop design very much like the iLamp: a flat screen (probably a touch one) mounted on a stand which is in its’ turn mounted on a box. The hardware is housed partly behind the display and partly in this very box.

I’d say, Microsoft is trying on Apple shoes here. The patent’s specs reveals, the screen’s position can be changed at various angles. It can also serve as Surface Hub and seems to meet VESA requirements. Also, the much rumored and expected “modular computing device” will do with broadband communication and a number of wireless accessories. Microsoft has already leaked new Bluetooth keyboard and mouse Surface-branded kits with minimalistic design.

So, don’t appoint anything important on October 26, we’ll see something interesting.

Later Addition to the Text

On October 26, 2016 Microsoft unveiled the Surface Studio, an all-in-one PC with a 28-inch PixelSense display. The new device has the thinnest display ever built according to Microsoft and a 3:2 display ratio. The Surface Studio also has an Intel Core processor, with a 2TB hybrid hard drive and an NVIDIA GPU. The device is also equipped with  integrated 2.1 speakers and a haptic feedback controller puck device called Surface Dial.

The new Microsoft personal computer has a unique hinge on the back designed to make it more flexible for creative pursuits, and Mr. Panay Panos, who leads engineering on all “premium” Microsoft hardware, said onstage the new Surface Studio has been designed to fundamentally change the way people create.

The Windows Surface Studio has a touchscreen, 32GB RAM, a 2TB hybrid drive that combines HD and SD storage,. It has four USB 3.0 ports, Ethernet, Audio, SD and Mini DisplayPort and the new radial input Surface Dial with haptic feedback. The base of the device is a short, square box that lies between the chrome supports under the display and contains the drive, ports and speakers. According to Microsoft, Surface Studio’s display uses 13.5 million pixels to make for a 192 PPI density that doesn’t reveal individual pixels no matter where the user is viewing from. The display also includes a feature Microsoft is calling TrueColor, which will allows creators to “render the world… as he or she believes it needs to be rendered.” (we quote Mr. Panay Panos presentation). This obviously means that users can change their color space on the fly, meaning, for example, a filmmaker working in DCI-P3 can easily switch to sRGB to see how their content will look on TVs that don’t support the wider P3 color specification.

The new all-in-one PC display features True Scale, which allows the screen to display print products at actual scale on the screen. “One inch on the screen is one inch in real life,” Panay Panos said onstage at Microsoft’s product reveal.

Surface Studio’s hinge consists of two chrome arms attached to the base. It is designed to be reflective on purpose to further help it “fade to background,” (we quote Mr. Panay here). The display also includes a linear mic array. The feature is able to pic up a user’s voice from across the room, making it essentially an integrated Echo-like speaker thanks to Cortana. The hinge is designed to let the user go from upright to flat working device without resistance,

The new computer also supports Surface Pen, an amazing option for graphics professionals that helps make True Scale feature very appealing . It basically means the user can write in full speed, as the latency looks very low – on a 1:1 8.5×11 piece of virtual paper on the screen.

Onstage, Mr. Panay Panos also introduced the Surface Dial which works with the screen intelligently. Actually Microsoft has designed a new input device, in line with gadgets like keyboards or mice. Dial has global controls built-in, meaning they work throughout Windows at the system level. The Surface Dial can work either laid out on the desk like a keyboard, or placed directly on the display. This helpful device has different functions depending on which way the user is using it. Surface Dial is compatible with Surface Book, Surface Pro 3 and Surface Pro 4 for off-screen functions.

At the presentation, a demo of the Surface Studio’s creative prowess included a demo from Madefire founder Ben Wolstenholme, who explained how he used to do his workflow on paper and in multiple steps, but he can now do it entirely digitally right on the Surface Studio, complete with assigning handy shortcuts like zooming for detailed inking to the Dial. “It’s amazing to me that Surface Studio makes it possible for me to have my entire creative workflow in one place,” Wolstenholme said. Microsoft underline that Surface Dial is open to developers, letting them create on-screen use cases that make it possible to use it to do many things like change color while the user is in the act of digital painting, or adjusting scale and switching between tools on the fly.

The Surface Studio is available for pre-order from October 26, 2016. It will arrive in Microsoft Stores for hands-on demos starting October 27. It’s going to ship in limited numbers by this holiday season. The new all-in-one PC is priced starting at $2,999. 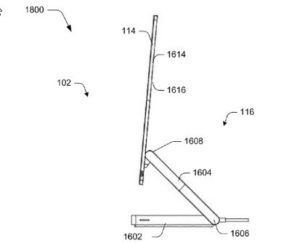