In January 2003, the recovery began, as Apple released iLife, a bundled package that included iPhoto, iTunes, iMovie and iDVD. It also announced two new PowerBook G4 models, a 12″ model similar to existing 12″ iBooks, and a wide-screen 17″ model. The company also announced Safari, its own Web Browser. The new PowerBooks sold well. The sales of flat panel iMacs remained steady. The iPod was beginning to take off. In April of 2003, the iTunes Music Store opened, which would sell individual songs through the iTunes application, for 99 cents each. When announced, the iTunes Music Store had the backing of the five major record labels, and a catalog of more than 200,000 songs. In October, Apple released iTunes for Windows.

January 6, 2003: In San Francisco, California, the Macworld Conference and Expo is held, over five days.

January 7, 2003: At the Macworld Expo, Steve Jobs unveils the Safari Web browser for Macintosh computers. The software is available as a free download. Jobs also introduces the Keynote presentation software, available for US$99.

January 7, 2003: At the Macworld Expo, Apple Computer debuts the iLife application suite, with iPhoto 2, iDVD 3, iMovie 3, iTunes 3, and Safari Web browser. The whole package but iDVD can be freely downloaded from Apple’s site and iDVD is offered for $50. This is widely seen as a play to further push the digital-hub concept into the consumer space.

January 20, 2003: The Fox Broadcasting Company airs The Fairly Oddparents TV show. Throughout the show, personal computers with keyboard and mouse are used to send email, with windows similar to those of the Mac OS.

January 27, 2003: The Fox Broadcasting Company airs The Fairly Oddparents TV show. A laptop computer is used, with a prominent green pear logo on the case.

April 2003: Apple Computer releases Mac OS X 10.2.5 operating system, with several minor updates and additions. It is available as a free download, or for US$19.95 on CD-ROM.

April of 2003: Apple unveils the iTunes Music Store, which would sell individual songs through the iTunes application, for 99 cents each. These songs could be played only on Macs or iPods, but Apple felt that by offering an easy to use, no-nonsense music service, it could make significant inroads to the digital music market. When announced, the iTunes Music Store already had the backing of the five major record labels, and a catalog of more than 200,000 songs.

October 2003:  Apple releases iTunes for Windows. While the iPod had been available for Windows for some time, it had used third-party software which failed to provide the unique user experience that iTunes/iPod integration allowed. With the release of a stable, user-friendly Windows version of iTunes, which included both iPod and Music Store integration, Apple was poised to take the digital music industry by storm.

November 2003: Apple Corps (a corporation founded by the Beatles) sues Apple Computer for the third time, demanding that Apple Computer cease using the Apple name and rebrand all products and services with non-infringing names. 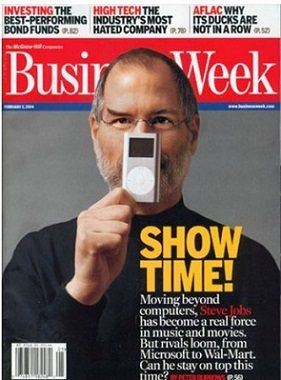