Apple TV a small network appliance, a digital media player that receives digital data and streams it to a capable television. You’ll learn everything about Apple TV in this section.

AppleTV is the set top box to provide HD TV with enhanced functionality. It can stream video from other Apple devices and from on-line stores. There are four generations of Apple-TV, the last one is powered with Siri and understands gestures. The Apple-TV of 2015 has a remote control with a touch panel in a bundle and costs a lot. Apple Inc. unveiled the device as a work-in-progress on September 12, 2006, and the company started taking pre-orders for Apple TV 1st generation on January 9, 2007. In fact, the Apple TV was Apple’s first serious foray into the set-top market.

Among other features, the device can sync or stream photos, music and videos from a computer running iTunes. For users who wish to connect the Apple TV to a computer, synchronization and streaming modes are supported. In synchronization mode the device works in a way similar to the iPod. It is paired with an iTunes library on a single computer and can synchronize with that library, copying all or selected content to its own hard drive.

Apple launched Apple TV on March 21, 2007 with a 40 GB hard disk (this version was discontinued on September 14, 2009). Two months later, on May 31, 2007, Apple released a 160 GB HDD. On January 15, 2008, Apple announced a major free software upgrade. The Apple TV turned into a stand-alone device. Since that, the device no longer required a computer running iTunes on Mac OS X or Windows. This made most of its hard disk redundant. The update allowed the Apple TV to rent and purchase content directly from iTunes Store, as well as download podcasts and stream photos from MobileMe and Flickr.

The second generation of Apple TV was introduced on September 1, 2010. This version was the first to run on a variant of iOS, besides the device was now housed in a mall all-black case, one-quarter the size of the 1st Gen Apple TV.

The 3rd generation was announced on March 7, 2012. The new model was externally identical to the second generation model and included a single-core A5 processor. Later, on January 28, 2013, Apple released a third generation “Rev A” which included component changes.

On September 9, 2015, Apple announced the fourth generation Apple TV, the first major update to the platform since the release of the second generation Apple TV. This model featured a new touch remote allowing swipe-to-select functionality instead of the old remote’s arrow button. The device integrated Siri support with a built in microphone and an accelerometer (IMU).

The Apple TV 4K (5th Generation) was introduced into the market on September 12, 2017. Despite the device’s external similarities to its predecessor, the Apple TV 4K features majorly updated internal features, paired with support for 4K and HDR movies, should the Apple TV be connected to a capable television, the HDR providing additional brightness and noticeably greater contrast. END_OF_DOCUMENT_TOKEN_TO_BE_REPLACED

The Apple TV is designed to help users easily navigate and enjoy the exciting world of video apps. However, since some Apple TV models look alike (for example, the Apple TV 2nd and 3rd generation look exactly the same), you will need the model number to tell them apart, before you proceed to trade them in. In this text you will learn how to identify your Apple TV by its model number and other details. END_OF_DOCUMENT_TOKEN_TO_BE_REPLACED

The Apple TV 4th generation was the first major update to the platform since the release of the 2nd generation Apple TV in September 2010. This model looks externally similar to the previous models, however, it runs on tvOS which is based on the iOS. It has its own third-party app library for a wide variety of native apps and games, rather than just a small number of pre-installed channels like earlier Apple TV devices. END_OF_DOCUMENT_TOKEN_TO_BE_REPLACED

The second generation Apple TV, housed in a very small all-black case, was the first Apple TV to run on iOS. The Apple TV 2nd generation box was one-quarter the size of the Apple TV 1st generation. END_OF_DOCUMENT_TOKEN_TO_BE_REPLACED

Apple TV lets you choose what you want to watch and when. Built on a powerful platform called tvOS, Apple TV users can interact with their TV in new ways. You can find the movie or TV show you’re in the mood for or turn your room into a game room, fitness studio, or classroom. Indeed, through apps, Apple TV gives you access to the most riveting entertainment content. Apps like Netflix, Treehouse TV, and iTunes have extensive catalogues of hit movies and TV shows. CraveTV and Crackle bring you Hollywood blockbusters and binge worthy original series. You’ll also find your favorite professional sports, breaking news, weather, fun stuff just for kids, educational programming, music, and thousands of free podcasts on almost every topic imaginable. END_OF_DOCUMENT_TOKEN_TO_BE_REPLACED

Apple TV 1st generation (also referred to as Apple TV original and Apple TV 1,1) is a computer equipped with an Intel processor. This made it possible to stream iTunes content from as many as five Macs or PCs to an enhanced-definition or HD TV. END_OF_DOCUMENT_TOKEN_TO_BE_REPLACED 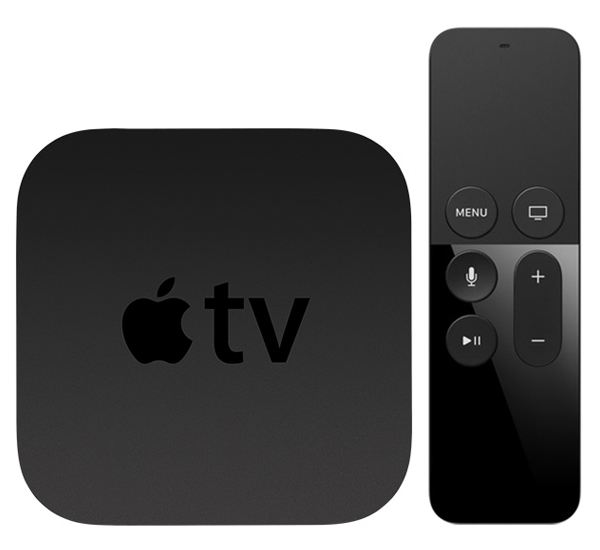