The iMac iMac (21.5-inch Retina 4K, 3.1GHz Intel Core i5, Late 2015) introduced in October 13, 2015, is almost identical to the iMac (21.5-inch, 2.8GHz Intel Core i5, Late 2015). It has a quad processor of enhanced microarchitecture plus Retina 4k display, but neither Fusion Drive, nor an SSD storage. The design is similar to the iMacs of 2012. This is the all-in-one desktop computer in an ultra-thin (5 mm depth at the edges) all-aluminum unibody casing behind the 21.5-inch LED-backlit IPS screen with cover glass fully laminated to the LCD and anti-reflective coating. There’s a bulge though in the center of the back panel to house all the hardware. The computer is mounted on an aluminum stand with a slightly tapered foot and an adjusting hinge.

The iMac (21.5-inch Retina 4K, 3.1GHz Intel Core i5, Late 2015) features a dual core 3.1GHz Intel Core i5 I5-5675R processor (Broadwell), with four independent processor cores on a single chip, DMI system bus and an integrated graphics core, 8 GB of RAM, a 1TB hard drive (5400 RPM), an SD memory slot card reader, an integrated Intel Iris Pro 6200 Graphics 6000 graphics with 1.7 GB of shared memory, a built-in FaceTime HD webcam and stereo speakers, as well as two “Thunderbolt-2” ports and 4 USB 3.0 ports. It also has built-in AirPort Extreme (802.11g) and Bluetooth 4.0. The cooling system is CPU controlled and the in-built speakers are mounted beneath the 21.5-inch screen for the clearer less distorted sound to bounce off the desk or other surface. The speakers’ grills also work as the vent ones. The iMac (21.5-inch Retina 4K, 3.1GHz Intel Core i5, Late 2015) is shipped with a compact aluminum Apple Wireless Keyboard and either with a “Magic Mouse” or a traditional wired Apple Mouse or a multi-touch Magic Trackpad. 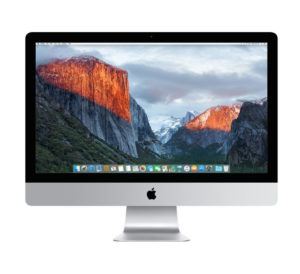