The iPod classic Photo 30 Gb was the revised 40Gb and 60 Gb iPod models. First, Apple dropped the capital P in “Photo”. Second, they gave her a smaller hard drive and a slimmer casing. The iPod classic Photo 30 Gb shares the casing material (i.e. stainless back), the Click Wheel, the 2-inch color LCD display with the previous models of the 4th Gen family. It is capable to playback photo to a synchronized music and on external displays, TV, etc. It offers 15 hours of music playback and 5 hours of slideshows but the skip protection is reduced as compared to previous models.

iPod is a music player and much more. With iPod, you can do the following:

What You Need to Get Started

To use iPod with a Macintosh, you must have the following:

Note: iPhoto may already be installed on your Mac. Check the Applications folder. iPhoto is also part of a suite of applications called iLife. If you have iPhoto 4 you can update it by choosing Software Update from the Apple Menu. This software is optional. iPod can also import digital photos from folders on your computer’s hard disk, and directly from most digital cameras (using the optional iPod Camera Connector).

To use iPod with a Windows PC, you must have the following elements:

Important note: iPod can import photo collections automatically from Adobe Photoshop Album 1.0 or later, and Adobe Photoshop Elements 3.0 or later. This software is optional. iPod can also import digital photos from folders on your computer’s hard disk, and directly from most digital cameras (using the optional iPod Camera Connector).

Setting Up iPod to Play Music

To set up iPod, you charge the battery, install software from the iPod CD, and import songs from your music CD collection or from the iTunes Music Store (available in some countries only). Then you transfer the songs to iPod for listening on the go. 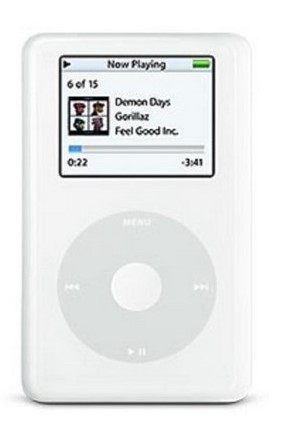