MacBook Air 7,2 (13-inch, Mid 2017) is designed entirely around SSD storage. This solution makes this model much lighter and more portable than traditional notebooks, it also provides faster access to data. This model is equipped with the fifth-generation Intel Core i5 and i7 processors with Intel HD Graphics 6000, and as Apple claims, “from editing photos to browsing the web, everything happens ultrafast”. It also comes equipped with two USB 3 ports, so you can connect the latest USB 3 devices and all your USB 2 devices as well. With just a few connections, this notebook transforms from an ultraportable notebook to a complete workstation.

For its MacBook Air 7,2 (13-inch, Mid 2017) Apple updated the processor from 1.6GHz to 1.8GHz – not a massive improvement, but it helps the MacBook Air remain a great choice for an entry-level Mac laptop.The difference between the two MacBook Airs released in June 2017 is the storage capacity. The choice users get as standard is either 128GB or 256GB, but you the user can also double the maximum on-board storage to 512GB for additional price. 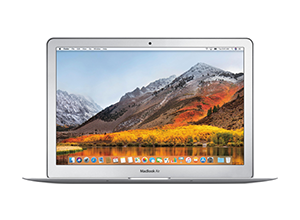