As of the time of this writing, Tim Cook is the current CEO (Chief Executive Officer) of Apple Inc. He became the company’s CEO in 2011. His full name is Timothy Donald Cook, and he was born on November 1, 1960. He is the seventh CEO of Apple Inc. and was previously the company’s COO (Chief Operating Officer) when Steve Jobs was still alive.

A very interesting fact about Cook’s biography, aside from all the other interesting facts in the life of this exceptional individual, is that he was born in Mobile, Alabama. The name of his place of birth seems to suggest his future destiny, for those who believe in it being more than just a mere coincidence.

He is the middle of three sons born to father Donald, a shipyard worker, and mother Geraldine, a homemaker. Tim Cook attended Robertsdale High School, and graduated second in his class in 1978. He then enrolled at Auburn University in Alabama. Tim Cook graduated from Auburn University with a bachelor’s degree in industrial engineering in 1982. Later he went on to earn an M.B.A. from Duke University’s Fuqua School of Business (in the late 80s) – an honor given only to students at the business school who graduate in the top 10 percent of their class.

Following a 12-year career at IBM, in 1994, Tim Cook became a chief operating officer at Intelligent Electronics. He then joined Compaq as vice president of corporate materials, procuring and managing product inventory. But after six months at Compaq, he left his position and took a job at Apple. Thus, Cook began working with Apple as early as March 1998. He was Senior Vice President of worldwide operations, and later Executive Vice President of worldwide sales and operations.

In August 2011, Cook was named Apple’s new CEO, taking over the position for former CEO and Apple co-founder Steve Jobs, who died in October 2011 after a long battle with cancer. In fact, Cook’s decision to join Apple wasn’t an easy one. He began working for Apple in early 1998, before the company had developed the iMac, iPod, iPad or iPhone. That year Apple was seeing declining profits instead of profit growth. Tim Cook said that prior to accepting his job at Apple, he was actually dissuaded from taking the job, and was told that the company’s future looked very bleak: “While Apple did make Macs, the company had been losing sales for years and was commonly considered to be on the verge of extinction. Only a few months before I’d accepted the job at Apple, Michael Dell, the founder and CEO of Dell Computer, was publicly asked what he would do to fix Apple, and he responded, ‘I’d shut it down and give the money back to the shareholders.’” Cook talked about this at length at a meeting with Auburn graduates in 2010.

Soon after Cook came on board, however, things began to look brighter at Apple Corp. As the company’s chief operating officer, Tim Cook was responsible for managing sales and operations worldwide, including sales activities, service, and support. At the same time, he was also a leader of the company’s Macintosh division. He also was involved in developing reseller/supplier relationship strategies. Less than a year after Cook started at Apple, the corporation was reporting profits for the 1998 fiscal year. It was an extraordinary shift from its 1997 fiscal report, when the results showed a net loss of $1 billion from the prior fiscal year.

Interestingly, Cook keeps his personal life private and very rarely discusses such matters publicly. However, he came out as gay and became the first CEO of a Fortune 500 company to do so.

Technically, corporations belong to shareholders. The appointed Board of Directors is supposed to oversee the day-to-day activities of the business in order to make sure everything is operating in the best interest of said shareholders. As such, Tim Cook serves on the Board of Directors of at least two companies, namely Nike Inc. and the National Football Foundation.

Further, Apple’s Board of Directors awarded Cook one million shares in March 2015, but the acclaimed CEO promised to donate his entire stock fortune to charity. Fortune wrote that Cook has about 120,000,000 stock and options valued at $665,000,000 USD.

A personal story about his life reveals that he offered a portion of his liver to Steve Jobs. The two men shared a very rare blood type. Apparently, Jobs reacted by yelling “I’ll never let you do that”.

Cook once wrote that he was inspired by these words of Dr. Martin Luther King Jr.: “Life’s most persistent and urgent question is, ‘What are you doing for others?’” He explained that his decision to put his personal privacy aside and make his sexual orientation public was an important step in advocating for human rights and equality for all.

“I don’t consider myself an activist, but I realize how much I’ve benefited from the sacrifice of others,” also wrote Tim Cook. “So if hearing that the CEO of Apple is gay can help someone struggling to come to terms with who he or she is, or bring comfort to anyone who feels alone, or inspire people to insist on their equality, then it’s worth the trade-off with my own privacy.”

Apple: Five Years With Tim Cook. Video uploaded by Bloomberg, on August 26, 2016. A milestone for the top man at Apple. CEO Tim Cook marks his fifth year anniversary at the helm of the world’s most valuable company. To mark the occasion, Bloomber takes a look back at Cook’s tenure. Bloomberg’s Pia Gadkari reports. 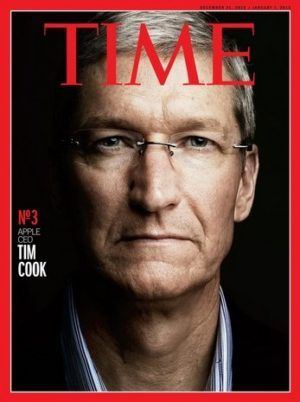