Apple II Computer was released in April 1977. The Apple II was based on Wozniak’s Apple I design. Several new elements were though added to the design : the computer had plastic casing, a rarity at the time. Apple II also could display color graphics. It was more powerful. included two game paddles and a demo cassette. The computer featured an integrated keyboard, sound, a plastic case, and eight internal expansion slots. Note that this computer was trademarked with square brackets as “Apple ][” and rendered on later models as “Apple //”.

The Apple II series of computers had an enormous impact on the technology industry. This device was the first personal computer many people ever saw. Its price was within the reach of many middle-class families, and a partnership with MECC helped make the Apple II popular in schools, and by the end of 1980 the company had sold over 100,000 Apple IIs. The popularity of the model bootstrapped the computer game and educational software markets and began the boom in the word processor and computer printer markets.

Discontinued: The first version terminated in May 1979. The last II-series Apple in production, the IIe, was discontinued on October 15, 1993.

Initial price: US$1,298 (4 kB of RAM).US$2638 (48 kB of RAM). Monitor sold separately. The initial price of the Disk II drive and controller was US$595, although a $100 off coupon was available through the Apple newsletter. The controller could handle two drives and a second drive (without controller) retailed for $495. 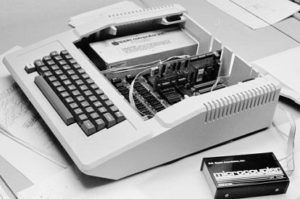