The Apple Multiple Scan 14 Display was a color monitor that supported a variety of resolutions. It had a built-in amplifier, and stereo speakers for producing sounds and music. They connected with a cable that had a male miniature TRS connector on each end.

The Symptom Charts helped to diagnose specific symptoms related to the product. Cures are listed on the charts in the order of the most likely solution, so Apple recommends starting with the first cure, and then verifying whether or not the product continues to exhibit the symptom. If the symptom persists, Apple recommends trying the next cure. (Note: If the user has replaced a module, he or she should reinstall the original module before proceeding to the next cure.) If the user is not sure what the problem is, or if the Symptom Charts do not resolve the problem, or for additional assistance, users are advised to contact Apple Technical Support.

No raster, LED off:

No raster, LED on:

No colors appear on screen:

In 832 x 624 screen resolution, screen is off center, has no raster, flickers, or appears distorted: 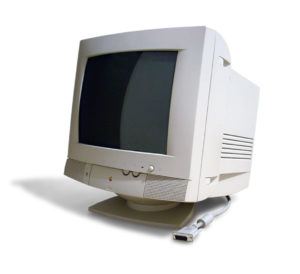