The PowerMac family, introduced in 1994, was developed through 1995. It was the first Mac to be based on the PowerPC chip, an extremely fast processor co-developed with IBM and Motorola. At the same time Mac OS was licensed to several companies, including Power Computing, one of the more successful Mac-clone makers (but only a handful of companies ever licensed the Mac OS because Apple was too restrictive in its licensing agreements). Apple’s problems were added to by the late-summer release of Windows ’95, which mimicked the Mac GUI. Thus Apple took its worst plunge ever in the winter of 1995-96. The company misjudged the market and pushed low-cost Performas over mid-range PowerMacs. Applefailed to make a profit at all.

January 4, 1995: At the Macworld Expo in San Francisco, California, Motorola introduces the Marco Wireless Communicator, based on the Apple Newton. The new communicator It features wireless communications. It weighs 1.8 pounds and costs US$900-1400.

January 19, 1995: Apple announces that it has shipped the 1 millionth Power Macintosh computer or upgrade. Globally, Apple takes 13% of the U.S. retail market share for personal computers.

January 30, 1995: Apple Computer announces availability of the Newton MessagePad 120 in the US. It includes Graffiti handwriting recognition software by Palm Computing, and Newton OS 1.3.

January (?): Apple Computer ships an updated Houdini board, the DOS Compatibility Card for the Power Macintosh. The card gives a 486DX2/66, sound, and 800×600 SVGA graphics. Its price is $740

February 14, 1995: Apple Computer extends its December 1994 lawsuit against San Francisco Canyon Company to include Microsoft and Intel. Microsoft removes the disputed code from Video for Windows, and releases version 1.1.

May 1995: Apple Computer unveils the next generation of its Mac OS at its Worldwide Developers Conference.

May 1995: Apple Computer ships System 7.5.2 for the Macintosh, with PCI bus support.

July 28, 1995: Columbia Pictures releases the film The Net to theaters. Several types of Apple Macintosh computers are used throughout the film. The game Wolfenstein 3D is played/debugged on a Macintosh computer.

November 1995: Apple abandons release of Dylan programming language due to the success of Java.

January 11, 1996: Umax Data Systems of Taiwan buys Radius’ Macintosh business, including the Macintosh operating system license. Umax will set up a US company, Umax Computer, to produce a line of Macintosh compatible computers.

February 2, 1996: At an emergency meeting of the board of directors of Apple Computer in New York, CEO Michael Spindler is demoted. He is replaced by Gilbert Amelio, who will also asume the position of Chairman of Apple Computer. « Spindler, by all accounts, was the wrong man for the job. A fairly impersonal man, Spindler’s office was nearly impossible to get into. However, in his two and a half years as CEO, Spindler oversaw several accomplishments. »  (Glen Sanford, Apple History).

February 9, 1996: Bandai Digital Entertainment unveils the Pippin Atmark computer. The system is licensed from Apple Computer, comes with keyboard, mouse, and modem for Internet access, and plugs into a television.

February 19, 1996: Apple Computer announces that Motorola’s Computer Group has licensed the Mac OS. Motorola can also sub-license the Mac OS to other manufacturers who purchase PowerPC motherboards from Motorola.

April 29, 1996: Power Computing releases the PowerTower line and the PowerCenter line of Macintosh-compatible computers. All systems use the PowerPC 604 processor, and range in price from US$1895 to US$4195.

May 6, 1996: Apple licenses the Mac OS to IBM, which may sub-license it to other manufacturers.

May 10, 1996: Apple Computer halts PowerBook 5300 production and initiates a recall.

May 14, 1996: In Los Angeles, California, Bandai Digital Entertainment announces the Pippin @World Apple compatible computer. The device includes a keyboard and CD-ROM player. It can be hooked up to a television and connected to the Internet. Bandai expects to ship the device in September, priced at US$599.

May 19, 1996: The Fox Broadcasting Company airs The Simpsons TV show in the US. A character refers to the Us Festival, sponsored by that guy from Apple Computers. Response by another character is What Computers?

September 17, 1996: Motorola announces its entry into the Power Macintosh clone market, by unveiling the StarMax series, featuring the PowerPC 603e and 604e processors, operating at 166 MHz and 200 MHz.

November 27, 1996: Apple Computer engineers and a manager meet with NeXT managers to investigate possibility of using OPENSTEP OS for future Mac computers.

December 1996: Apple makes an announcement that it would be acquiring NeXT, and that Steven Jobs would be returning to the fold. The merger was brought about in order to acquire NeXTstep, which was to become the basis for Apple’s next-generation OS, Rhapsody.

December 2, 1996: Steve Jobs meets with senior Apple Computer managers to convince them that NeXT technology is right for Apple.

December 20, 1996: Apple Computer announces it will buy the NeXT Software company for about US$400 million in cash and Apple stock. NeXT Software CEO Steve Jobs will become an advisor to Apple chairman and CEO Gilbert Amelio.

The History of Apple (40th Anniversary). Video published by Martin Nobel on May 2, 2016. How have three Atari workers managed to turn Apple from a company in a garage into one of the most powerful brands in the world? This is the history of Apple, after 40 years! 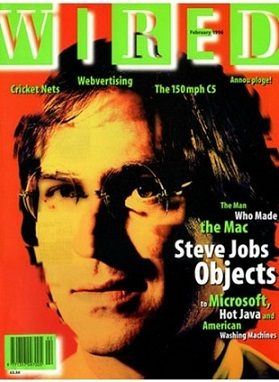