Apple Watch Series 4 40mm is the fourth generation of the smart watches designed and developed by Apple Inc. This is a portable communication device with the focus on health care. It requires iPhone 6 or older with iOS 12 or older for work.

The Apple Watch Series 4 40mm has a stainless steel frame and a ceramic back panel with a redesigned heartbeat sensor in it. The display is protected with the sapphire glass.

The Apple Watch Series 4 40mm features a new S4 chip that is twice faster than its predecessor and the AMOLED touchscreen display that is 30% larger. The sensors include an accelerometer, a barometer, a gyroscope and a heart rate sensor. The Digital Crown features the built-in haptic mechanism. The speaker now is 50% louder than in the previous series. 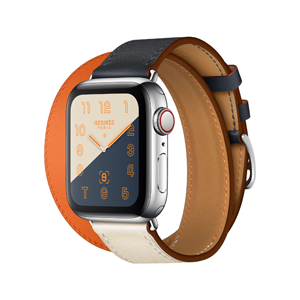