Apple announced the iPhone X on September 12, 2017, but it was available only starting November 3, 2017. This smartphone was released to celebrate the 10th anniversary of the first Apple’s iPhone, an event that changed our world forever. That’s why the iPhone got the Roman figure X representing the ten year anniversary.

The iPhone X has a lot of amazing features that set it apart from other mobiles and previous Apple iPhone’s models. This is the eleventh generation of the iPhone. Apple annouced this model on September 12, 2017, alongside the iPhone 8 and iPhone 8 Plus. This model was released on November 3, 2017.

This smartphone launched to celebrate the tenth anniversary of iPhones showcased what Apple considers technology of the future. Indeed, it specifically adopted OLED screen technology for the first time in iPhone history. Also it used a glass and stainless-steel form factor, offering wireless charging,

Apple removed the home button on this model in favor of introducing a new bezel-less design. It almost removed all the bezels on this phone.

The electronic giant also released a new type of password authentication called Face ID for iPhone X, a new authentication method which scans the user’s face to unlock the device. This technology can be also used foranimated emojis called Animoji. The nearly bezel-less form factor marks a new step to in the iPhone user interaction, as it involves swipe-based gestures to navigate around the OS rather than the classical home button present in previous iterations of the iPhone lineup.

The display and build quality of this model were universally praised; its camera scored positively on tests. 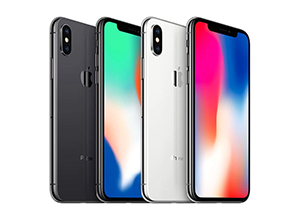