These questions and answers will help people who have never used Apple Watches, as well those who’d like to expand their knowledge about these nice devices and their particular characteristics, tricks and other useful or just amazing information.

What is the Difference Between Resetting Apple Watch and Erasing it?

Answer: Resetting Apple Watch is similar to restarting it. However, if you reset Apple Watch, you also reset key system settings that may have become corrupted. Note that resetting doesn’t not remove data and media files from Apple Watch. On the contrary, erasing Apple Watch does remove those files.

How to Know Apple Watch and iPhone are connected

You can verify that Apple Watch is connected to iPhone at any moment. To do so, swipe up from the watch face to display the Glances screen, and then swipe right until the Settings Glance appears, The word Connected will be seen at the readout at the top of the watch face. If not, you’ll see the word Disconnected. In both cases a small icon will accompany the word (green iPhone icon or red iPhone icon with a red slash).

What Functions Can Apple Watch Perform Without iPhone

Answer: Apple Watch can work with iPhone disconnect, but in this case the number of useful functions is limited. However, user can use all the main timekeeping functions, such as the watch face, Alar, Timer, Stopwatch. Besides, the workout app can monitor your workouts without iPhone. You can also continue to measure your physical activity toward the Move, Exercise, Stand goals. It’s possible to make payments via Apple Pay without iPhone and use Music App to play music via Bluetooth to headphones and speakers. Passbook will display key documents (such as boarding passes) and user will be able to use Photos app to view the photos synced to Apple Watch.

What Functions Apple Watch Performs Being Connected to iPhone?

Answer:Apple Watch works with iPhone for the following main functions:

What About Battery Run-time?

Answer: iPhone uses more power because of Apple Watch, as the devices communicate vie Bluetooth. Beside, Apple Watch makes iPhone to connect to the Internet to download data. All these actions reduce iPhone’s run-time on battery. On the other side, it’s very likely that the owner will use Apple Watch instead of iPhone for sending messages, checking his or her e-mail and notifications. In these cases the watch even saves some battery life and thus the effect on the battery life might well work out to be even positive.

What Does the New Button in the Face Chooser do?

Answer: The New button enables the user to create and save a custom watch face by customizing one of the existing faces.

Is it possible to pair Apple Watch with iPad instead of iPhone?

Answer: No, it is not. You can pair Apple Watch only with iPhone.

Can I Pair Apple Watch with Two iPhones and Switch Between Them?

Answer: No. You can pair Apple Watch with only one iPhone at a time. To switch between the iPhones, you must unpair Apple Watch from the current iPhone and then pair it with another iPhone. This procedure takes several minutes but is otherwise straightforward.

Should I Use the Unlock Apple Watch with iPhone Feature?

Answer: The Unlock Apple Watch with iPhone feature saves your time and efforts over unlocking Apple Watch manually. You should consider however whether it will compromise your security or not. Unless you wear Apple Watch all the time, it is arguably better not to enable this feature.

How Does the New Button Work?

Answer: To choose and customize the custom face, on Apple Watch screen, force-touch the watch face to display the face chooser, next swipe left until you see New Icon. Tap it, then scroll up or down, either using your finger or turning the Digital Crown, to locate the face you want to use as the basis. Tap the face to apply it. Then force-touch the face to open again the face chooser, tap Customize, and customize the face.

Where Can I Get Other Faces for Apple Watch?

Answer: Apple won’t let developers create and sell their own Apple Watch faces in the App Store. The company has banned alternative watch faces (Apple has also banned third-party apps whose primary function is to tell the time from the App store. There exist still free alternative watch faces offered by independent companies. They also say, Apple will provide other watch faces in due course to give users more flexibility in customizing their watches.

How Сan I Pair Apple Watch with iPhone Manually?

How Can I Clean My Apple Watch?

Answer: To keep Apple Watch in good condition, you will need to clean it. Keep in mind the device is water-resistant and splash-resistant, but it is not waterproof. So take care of it and work with precaution: wipe the watch with a nonabrasive, lint-free cloth. If the face needs it, dampen part of the cloth and wipe the watch face with it. Dry the watch with the dry part of the cloth afterward. You should clean the watchband in the same way to avoid damage. Never use cleaning liquids, soap, abrasive materials to clean Apple Watch or the band. Do not use compressed air or a hair dryer to dry the device.

If the Digital Crown becomes sticky and does not turn smoothly, you may need to wash it out. To wash the Digital Crown, Apple recommends holding Apple Watch under a narrow and steady stream of water for 10 or 15 seconds. The water will run over the gap between the housing and the Digital Crown. While the water is running, click the Digital Crown in and out, and turn it both clockwise and counterclockwise.

Answer: If you apply grayscale to Apple Watch, it may Improve Battery Life a little. In fact Apple Watch has an AMOLED display, which requires less power to display black pixels (AMOLED is the acronym for active-matrix organic light-emitting diode.)

How Do I Use the Zoom Feature?

Which Alerts Should I Receive on Apple Watch?

Answer: The alerts you receive on Aplle Watch depend on how you use the device, and how you schedule your appointments. Seeing upcoming events on Apple Watch and seeing Calendar events shared with iPhone may be useful and helpful. You may not need to see invitaions or invitee responses on Apple Watch.

What Is the Best Way to Access Calendar Quickly on Apple Watch?

How Do I Tell Mail Which Contacts Are VIPs?

Answer: On iPhone, press Home to open the Home screen. Tap Mail to open the Mail app et on the Mail boxes screen, tap Info to the right of VIP. If Info does not appear, tap the VIP button itself, on the VIP List screen, tap Add VIP. On the Contacts screen, tap the contact you want to add to the list. In Mail on OS X, click a message from the contact, right-click the sender, then click Add to VIPs on the contextual menu.

Which Workout Type Should I Choose for a Workout That the App Does Not List?

How to Control Playback in Apps Other Than Music?

How Can I Put Music on Apple Watch?

How Does the User Control Which Messages the Mail App on Apple Watch Receives?

Answer: You work on the Mail screen in the Apple Watch app on iPhone. You can choose to include all the inboxes for the accounts you use with iPhone or just some mailboxes. See our text How to Configure the Mail App for details.

Is There Any Advantage to Using Digital Crown to Open an App?

Can I Sync Multiple Playlists to Apple Watch?

Answer: Yes, it is possible to sync multiple playlists by adding them to another playlist and then syncing that playlist. This workaround may be somewhat clumsy, but you may find it effective: Create the separate playlists containing the appropriate songs in iTunes on your computer or in the Music app on your iPhone as usual. Then create a new playlist, add those playlists to it, and sync the new playlist to Apple Watch.

For Which App Should You Enable Handoff?

Answer: Key Apple Watch apps (such as Phone or Messages), work with iPhone whether Handoff is turned on or off. Enable Handoff for My Apps at first on the Handoff & Suggested Apps screen in the Settings apps on iPhone. If you find Handoff useful, you may want to try enabling Handoff for App Store as well. Note than on iMac and iPad Handoff must be turned on for these features to work.

Where Can I Get Apps for Apple Watch?

Answer: The App store is the only official source of consumer apps for Apple Watch, as Apple encourages developers to conceive and submit apps for approval and for inclusion on the App Store. You may be able to find other apps on the Internet. However, you should be aware that these apps may contain malevolent code or just be poorly programmed. They may also be fakes built to compromise your iPhone. But some institutions and enterprises create their own iPhone apps to distribute them to their employees. These apps can have Apple Watch Extensions which work normally. In these cases, an administrator will provide you with the app.

What Are In-App Purchases?

Answer: In-app purchases are items than users purchase within an app, usually to unlock extra features or functionality. Many developers make their apps free to encourage people to install and use the apps. These developers then make money by charging for vital features through in-app purchases.

Why Does Apple Watch Not Display Notifications For New Messages?

Answer: To see when a message was sent, tap the message, and drag it to the left until the time stamp appears. When you let go of the message, it snaps back into place.

How Can I Change the Time Zone on Apple Watch?

Why Tell Apple Watch About the Wrist?

Answer: Apple Watch includes accelerometers to interpret your movements so the device can react appropriately to them. It tries to distinguish between you raising your wrist to wake Apple Watch and you moving the wrist for other purposes. Specifying which wrist Apple Watch is on helps the device’s software to interpret the movements without mistake.

Why the Capacity of My Apple Watch is only 6.2 GB while it has 8 GB of storage?

Answer: The advertised capacity measurement is 8 billion bytes, which is described as 8 gigabytes. But computers count storage in 1024 x 1024 x 1024 bytes, so the real capacity in 7 percent less than the capacity used in the marketing language. Besides, the Apple Watch operating system takes up some space. You cannot get rid of the OS, nor should you want it.

What Settings Should I Choose for an App I Have Installed?

How Do I change the time zone on Apple Watch so it shows the same time as iPhone after traveling to a different time zone? 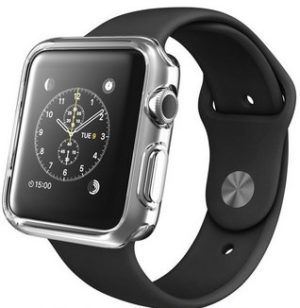