Main Site → About Apple → iSpace → Apple Serial Number: Why Is It Important

Where can I find this serial number?

The serial number is printed on the device. If it’s scratched or worn, look up the number up in your device’s settings menu. You can also find it printed on the box in which the device came.

There are tons of online tools that can help look up the serial number. Why can’t I just use one of those?

First of all, you may not always find yourself in a place where you have internet connection, or have slow service. Secondly, every software can have bugs from time to time and can display incorrect info. Just download the tables and compare the codes yourself.

You might get a bit overwhelmed and think it may be complicated to figure this out. Trust us… it is very simple!

This is the 12-character alphanumeric serial number used by Apple after 2010. Let’s put it this way:

Of course, the real serial number looks differently, but I used these letters on purpose.

The manufacturing location is represented with the alphanumeric code. The complete list of factories is hard to obtain, but most locations are known. Usually, the China-based factories are marked both with letters and digits while other Asian, American, and European factories are given alphabetical codes often after the first letters of the place. The letters RM stand for ReManufactured or refurbished.

The year of manufacture is also encrypted by an alphabet code starting with the letter C. Apple splits the year in halves because the company is famous for introducing silent upgrades every six months or so. Also, the changes in the downstream supply chain can occur. So, the fourth character of the serial number shows the year the device was manufactured in, and if it was in the first or second half of the year. The range loops every decade. For example, H can stand for the first half of 2012 and it will represent the first half of 2022 as well. See the table below.

The fifth character stands for the week in which the device was manufactured. Yes, Apple is very meticulous about it. Here the company uses both letters and digits. The first through ninth weeks are represented with digits from 1 through 9. For the tenth through twenty-seventh weeks the letters C through Y are used, excluding the vowels A, E, I, O, and U, and the letter S.

For devices manufactured in the second half of the year it’s a bit tricky. The weeks are encrypted with digits starting with 28 through 52.

Each Apple device manufactured in the same location and during the same week of the same year get a unique identifier that is represented with the next three digits. It’s starting to look more and more like a person’s ID, isn’t it? Let’s see what the last digits can tell us.

The last four digits of the serial number represent the product’s model. The number of models of Apple products is too huge to list their codes in one table, so here you have to search for them online. It’s an easy thing to do.

Naturally, when the second decade of the 21st century began and the year had to be put down with two digits instead of one, Apple overhauled the serial number conception.

Video uploaded by iDeviceHelp on September 8, 2018 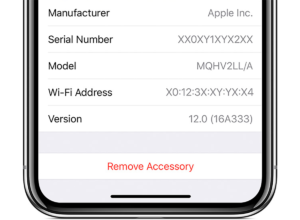