The year 2004 was a turning point for Apple. Indeed, the company created a solid financial base to work with, and began experimenting with new parts from new suppliers. As a result, new designs were developed over a short amount of time, with the release of the iPod Video, the iPod Classic and other products. In the summer of 2004, the iMac G5 replaced the iMac G4 after a few iterations increasing the processing speed and screen sizes of the latter from 15″ to 17″ to 20″. Apple’s Xserves were updated to use the G5, and replaced the Power Mac G5 as the main building block of Virginia Tech’s System X. By the way, Apple’s Xserves was ranked in November 2004 as the world’s seventh fastest supercomputer. A new iMac based on the G5 processor was announced on August 31, 2004 and marketed in mid-September. The first Apple store opened in Ginza district of Tokyo, Japan in 2003, was followed by a store in Osaka, in August 2004.

January 2004: Apple releases the iPod mini, which while smaller in capacity than the original iPod, was smaller than many cellphones.

April 2004: In the first year alone, the iTunes Music Store sold more than 70 million songs, and by July this number had increased to more than 100 million. The iTunes Music Store had a 70% market share among all legal online music download services. iPods had moved from expensive toys to must-have Christmas presents, and Apple found itself in the position of having a monopoly for the first time in several decades.

August 31, 2004: At the Apple Expo in Paris, France, Apple Computer unveils the new Apple iMac computer based on the G5 processor. It features 17- or 20-inch color LCD display, 1.6 or 1.8 GHz PowerPC G5 processor, 256 MB RAM, 512 KB L2 cache, 80 or 160 GB hard drive, DVD-ROM/CD-RW or DVD-R SuperDrive, 64 MB NVidia GeForce 5200 graphics, 10/100 BaseT Ethernet, three USB 2.0 ports, two FireWire 400 ports, AirPort. The 2-inch thick display contains the computer components. Price range is US$1299 to $1899. The new computer was made available in mid-September. This model dispensed with the base altogether, placing the CPU and the rest of the computing hardware behind the flat-panel screen, which is suspended from a streamlined aluminum foot. This new iMac, dubbed the iMac G5, was the world’s thinnest desktop computer, measuring in at around two inches.

October 2004: In an effort to court a broader market, Apple opens several mini Apple stores. The company seeks to capture markets where demand does not necessarily dictate a full scale store. These stores follow in the footsteps of the successful Apple products: iPod mini and Mac mini. The mini stores are only one half the square footage of the smallest “normal” store and thus can be placed in smaller markets.The first of these stores is opened at Stanford Shopping Center in Palo Alto, California.

October 6, 2004: Microsoft releases Virtual PC 7 software for the Apple Macintosh. The product emulates a Pentium processor, allowing the Microsoft Windows operating system and applications to run on the Macintosh. Price is US$249, including Windows XP Professional.

October 2004: A European Union version of iTunes Music Store opens (actually, a Eurozone version). The store is not initially available in the Republic of Ireland due to the intransigence of the Irish Recorded Music Association (IRMA) but it will eventually open on Thursday January 6, 2005.

December 16, 2004: Apple sells its 200 millionth song on the iTunes Music Store to Ryan Alekman from Belchertown, Massachusetts. The download was The Complete U2, by U2. 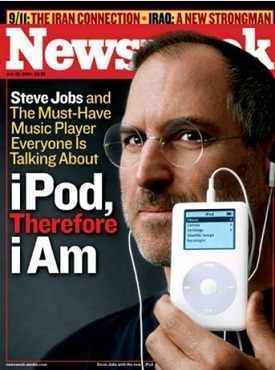