The Apple Cinema HD Display (30-Inch, Aluminum) is meant to complement the Apple hi-end products, such as the Power Macintosh G5 and PowerBook G4 models. It has an anodized aluminum casing with a slight bezel, and is mounted on an aluminum stand with an adjustable hinge.

The display also meets the Electronics Standards Association’s (VESA) mounting interface standard and can be mounted on a wall or an articulating arm. Technically it is an active-matrix LCD matte display with maximum resolution of 2560×1600 pixels with an integrated two port USB hub, two FireWire “400” ports and the industry standard DVI (Digital Video Interface) socket. Thus, the Apple Cinema Display (30-Inch, Aluminum) is compatible not only with a Macintosh but also with an IBM desktop.

Video uploaded by zollotech on December 5, 2014. 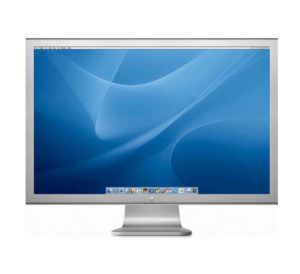