Once upon a time, when computers were the size of a desk, there was no mouse, just a keyboard. To make a computer complete a task you had to print the command line and enter it. There were no windows, hyperlinks, or menus, and dinosaurs roamed the earth. Ok, just kidding about the dinosaurs.

WWas it Steve, or was it Bill? It was Xerox company. Say ‘thank you’ while copying your docs next time. In 1973, the Xerox Alto computer used the first ever GUI developed by Alan Kay in Xerox PARC (Palo-Alto Research Center). It incorporated text-based hyperlinks, windows, menus, radio buttons, and check boxes manipulated with a mouse. It also had a click-and-drag, but not a drag-and-drop. Users could click and drag the menus.

Back then, GUI demanded too resourceful a hardware, and those at Xerox didn’t see how they could market their creation. It remained just an interesting research project with a mind to the future, the project they liked to show to visitors like Steve and Bill.

Jobs was the first to realize the potential of the GUI, and invited Xerox engineers over to Apple corporation. His decision paid off, and in 1983 the first GUI based Apple, Lisa, appeared. Lisa wasn’t named after a developer’s girlfriend or daughter, it stood for Local Integrated System Architecture. The Apple Lisa had a microscopic 5 MB hard drive (so small it’s even cute!), a faulty floppy drive, and was slow. However, it introduced the menu bar and window controls lacking in Xerox Star.

The TV ad for Apple Lisa was based upon Orwell’s “1984” dystopia, and was directed by Ridley Scott himself. Interestingly enough, just two years earlier he released the greatest sci-fi movie of the 20th century, “Bladerunner”, featuring a futuristic personal computer with GUI and human interactive interface. In the movie Deckard has a home computer on which he examines the pictures found in the den of a runaway replicant.

Immediately other companies began developing their GUI, Microsoft among them. Speaking of which, Gates and Jobs constantly argued about who stole the idea from whom. Apple sued Microsoft for using Lisa GUI in Windows 1.0. However, as Apple itself was in a precarious position, risking the claim from Xerox in regard to the same matter, nothing came out of it.

The question of who the author of the first marketed GUI was has remained complicated until now. Xerox came up with the idea, but Apple and Microsoft developed it and added new features, so it’s really hard to say, which is which.

I just wonder, if they have started developing neuro interface already. Have you, guys?? 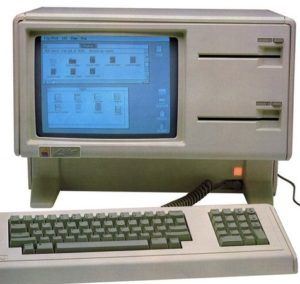