The iMac Core i5 / 3.3GHz with 27-inch screen continues the late 2014 iMacs line up and has major improvements in display but lacks Fusion Drive as a standard storage. The quad core processor (Intel Core-i5 Ivy Bridge with Haswell microarchitecture) has been downgraded to 3.3 GHz. The design is similar to the iMacs of 2012. This is the all-in-one desktop computer in an ultra-thin (5 mm depth at the edges) all-aluminum unibody casing behind the 27” LED-backlit IPS widescreen Retina 5K display with the higher pixels’ density of 300 PPI. There’s a bulge though in the center of the back panel to house all the hardware. The computer is mounted on an aluminum stand with a slightly tapered foot and an adjusting hinge. The iMac Core i5 3.3 27-inch (mid- 2015) features a quad core 3.3 GHz Intel “Core i5 I5- 4590” processor (Haswell), with four independent processor cores on a single chip, DMI system bus and an integrated graphics core, 8 GB of RAM, a 1TB hard drive (7200 RPM), an SD memory slot card reader, an AMD Radeon R9 M290 graphics with 2 GB of shared memory, a built-in FaceTime HD webcam and stereo speakers, as well as two “Thunderbolt-2” ports and 4 USB 3.0 ports. It also has built-in AirPort Extreme (802.11g) and Bluetooth 4.0. The cooling system is CPU controlled and the in-built speakers are mounted beneath the 27-inch screen for the clearer less distorted sound to bounce off the desk or other surface. The speakers’ grills also work as the vent ones. The iMac Core i5 3.3 27-inch (mid- 2015) is shipped with a compact aluminum Apple Wireless Keyboard and either with a “Magic Mouse” or a traditional wired Apple Mouse or a multi-touch Magic Trackpad. 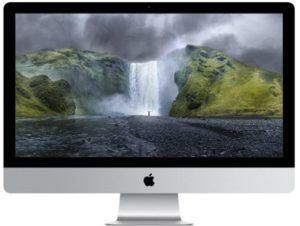