The iPod Classic 4th Generation (2004) U2 Special Edition is identical to the 20 GB configuration of the iPod 4th Generation in hardware, but has a special edition case featuring a black front, a stainless steel back with laser etched signatures of the U2 band members, and a red ClickWheel. An “exclusive” U2 poster and a US$50 discount coupon for “The Complete U2” “box set” download came in a bundle. It cost US$30 more. The iPod classic 4th Gen acquired a lot of features from the junior model iPod nano, including: the touch-sensitive scroll wheel with four auxiliary buttons under it; the energy-efficient components, enhancing the battery life for over 12 hours of music playback, while the battery remained as in the previous model. The iPod classic 4th Gen case became thinner of course, while the accessories to go by were cut back by the Apple for some editions.  Initially, the two models were being offered: the 20 Gb model and the 40 Gb model, but later on October 26, 2004, the iPhoto was introduced as the iPod classic 4th Gen premium edition. The device featured a 220 x 176 pixel LCD capable of displaying up to 65,536 colors. It supported JPEG, BMP, GIF, TIFF, and PNG graphic file formats, and the users could attach their iPods to TV or other external display for slideshows via a bundled TV cable. 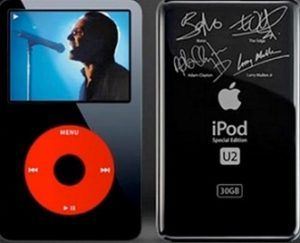