Apple announced a MacBook unibody aluminum model MacBook 5,1 (13-inch) featuring a new Nvidia chipset at a Cupertino, California with the tagline: The spotlight turns to notebooks. Made of a unibody aluminium case with patered edges, this model had an integrated Nvidia GeForce 9400M graphics up to five times faster than the original MacBooks’ Intel chipset. The MacBook unibody aluminium model was thinner than the original polycarbonate MacBooks. The keyboard of the higher-end model included a backlight.

Introduced on January 21, 2009, the MacBook 5,2 (13-inch)  was a feature-bump of the existing low-end white MacBook model. The processor ran at a slightly slower clock-rate. The amount of RAM was doubled to 2GHz. The bus speed was increased to 1066MHz. The graphics chipset received a significant upgrade. This MacBook model was shipped in a single configuration, and was replaced in June 2009 with a new model. Introduced in May 2009, the MacBook 5,2 (13-inch, Mid 2009) was a modest speed-bump of the previous MacBook. The processor speed was increased by 6.5% to 2.13 GHz. The hard disk capacity was increased to 160 GB. This MacBook model was shipped in a single configuration, with 2 GB of RAM. It was replaced in October 2009 by the unibody polycarbonate model.

Troubleshooting with MacBook 5.1: Occasionally you may have problems while working with your computer, but if you experience a problem with your MacBook, there is usually a simple and quick solution. Think about the conditions that led up to the problem. Keep in mind that making a note of things you did before the problem occurred will help you narrow down possible causes and find the answers you need. Note the following:

If the problem occurs frequently, choose Help > Mac Help from the menu bar at the top of the screen. Then search for the word “freeze” to get help for times when the computer freezes or doesn’t respond.

On the other hand, if the problem occurs only when you use a particular application, check with the application’s manufacturer to see if it is compatible with your computer.

If you know an application is compatible, you might need to reinstall your computer’s system software.

Wait a few seconds. If the computer doesn’t soon start up, shut it down by holding down the power button for about 8 to 10 seconds. Disconnect all external peripherals and try restarting by pressing the power button while holding down the Option key. When your computer starts up, click the hard disk icon, and then click the right arrow. After the computer starts up, open System Preferences and click Startup Disk. Select a local Mac OS X System folder.

If that doesn’t work, try using Disk Utility to repair the disk:

If your MacBook doesn’t turn on or start up Try the following suggestions in order until your computer turns on:

If the problem persists, return the computer to its factory settings by disconnecting the power adapter, removing the battery, and holding down the power button for at least 5 seconds.

If you recently installed additional memory, make sure that it is correctly installed and is compatible with your computer. See whether removing it and reinstalling the old memory allows the computer to start up.

Press the power button and immediately hold down the Command, Option, P, and R keys simultaneously until you hear the startup sound a second time. This resets the parameter RAM (PRAM).

If you still can’t start up your MacBook, see “Learning More, Service, and Support” for information about contacting Apple for service.

If the screen suddenly goes black or your MacBook freezes, try restarting the computer:

If you press the battery button, and all battery indicator lights flash five times quickly,this means that your battery needs to be replaced. Contact an Apple Retail Store or an Apple Authorized Service Provider (AASP).

Here are some guidelines Apple suggests the users follow when working with trackpad and keyboard on their MacBook:

Some useful trackpad and keyboard tips and shortcuts:

When the MagSafe power adapter is not connected, this MacBook draws power from its battery. The length of time that you can run your MacBook varies, depending on the applications you use and the external devices connected to your MacBook. Turning off features such as AirPort Extreme or Bluetooth wireless technology can help conserve battery charge. However if the battery runs low while you are working, you should attach your power adapter immediately and let the battery recharge. To replace a low battery with a charged one when your computer isn’t connected to a power adapter, shut down your computer. You can determine the charge left in the battery by looking at the battery level indicator lights on the battery itself. Press the button next to the lights, and the lights glow briefly to show how much charge is left in the battery. You can check the charge with the battery in or out of the MacBook. Important note: If only one indicator light is on, very little charge is left. If no lights are on, the battery is completely drained and the MacBook won’t start up unless the power adapter is connected. If this happens, plug in the power adapter to let the battery recharge, or replace the drained battery with a fully charged battery. The amount of battery charge left can also be checked by viewing the Battery status icon, which will be found in the menu bar. The battery charge level displayed in the status iconis based on the amount of power left in the battery with the applications, peripheral devices, and system settings the user is currently using. If you prefer to conserve battery power, you should close applications and disconnect peripheral devices not in use, then adjust your Energy Saver settings.

This MacBook has two memory slots that you access by removing the computer’s battery. The computer comes with a minimum of 2 gigabytes (GB) of 667 MHz Double. Data Rate (DDR2) Synchronous Dynamic Random-Access Memory (SDRAM) is installed. Both memory slots can accept an SDRAM module that meets the following specifications:

It is possible to add two 2 GB memory modules for a maximum of 4 GB of memory. For best performance, the user can fill both memory slots and install an identical memory module in each slot. Important warning: Apple recommends that the user invites an Apple-certified technician install memory. Consult the service and support information that came with your computer for information about how to contact Apple for service. If the user attempts to install memory and damage the equipment, such damage will not covered by the limited warranty on the computer.

How to Install Additional Memory

https://www.youtube.com/watch?v=VcMWF8cApsM
CNET’s Dan Ackerman runs through updates to Apple’s line of laptops, with more processing power for the MacBook Pro, MacBook and MacBook Air. Published on June 5, 2017 by CNET. 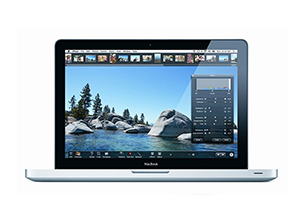