On October 27, 2016, Apple introduced the thinnest and lightest MacBook Pro 13,2 (13-Inch, Late/Touch Bar 2016) ever, along with a new interface. Instead of the traditional row of function keys, the new device is equipped with a Retina-quality Multi-Touch display called the Touch Bar. New MacBook Pro is also the most powerful MacBook Pro ever. Indeed, it features sixth-generation quad-core and dual-core processors, up to 2.3 times the graphics performance over the previous generation. It also has super-fast SSD’s and up to four Thunderbolt 3 ports.

The MacBook Pro 13,2 (13-inch, Late/Touch Bar 2016) is faster and more powerful than before. Yet this machine is remarkably thinner and lighter. The new MacBook Pro has the brightest, most colorful Mac notebook display. It features sixth-generation quad-core and dual-core processors, delivering pro-level processing performance and up to 2.3 times the graphics performance over the previous generation.

This MacBook Pro was the thinnest and lightest MacBook Pro ever for the moment of its release. It features an entirely new enclosure design and all-metal unibody construction that creates a thin and light notebook, which is rigid and dense. The 13-inch MacBook Pro is just 14.9 mm thin, and it’s 17 percent thinner and 23 percent less voluminous than the previous generation. It weighs only three pounds and is thus nearly half a pound lighter then the previous generation.

Built on groundbreaking ideas, this device introduces the Touch Bar – a Multi-Touch enabled strip of glass built into the keyboard for instant access to the tools you want, right when you want them. The new 13-inch MacBook Pro also features new Touch ID and a more responsive keyboard.

This MacBook Pro features the security and convenience of Touch ID, a more responsive keyboard, a larger Force Touch trackpad and a new audio system. The Touch Bar places controls right at the user’s fingertips. It allows users to easily access apps like Mail, Finder, Calendar, Numbers, GarageBand, Final Cut Pro X and many more, including third-party apps. For example, the Touch Bar can show Tabs and Favorites in Safari, enable easy access to emoji in Messages or provide a simple way to edit images or scrub through videos in Photos. 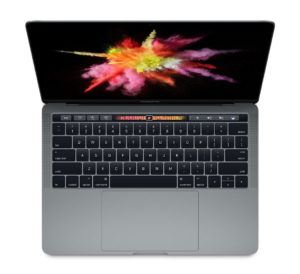