On September 13, 2016, Apple announced that Swift Playgrounds, an innovative new iPad app from Apple that makes learning to code easy and fun for everyone, was available on the App Store. In its press-release, Apple underlined that with Swift Playgrounds, real coding concepts were brought to life with an interactive interface that allowed students and beginners to explore working with Swift, the easy-to-learn programming language from Apple used by professional developers to create world-class apps.

According to Apple, Swift Playgrounds app is approachable enough for students with no previous programming experience to begin exploring key coding concepts, but also powerful enough for skilled programmers to experiment and express their creativity using Swift.

“Everyone should have the opportunity to learn coding, and we are excited to bring Swift Playgrounds to the next generation of programmers looking for a fun and easy way to explore key coding concepts using real code,” said Craig Federighi, Apple’s senior vice president of Software Engineering. “More than 100 schools around the world have already committed to adding Swift Playgrounds to their fall curriculum, and we can’t wait to see what students create with it.”

Swift Playgrounds also features built-in templates that users can modify and build on to create their own programs with graphics and touch interactions. They can then share their creations with friends using Mail or Messages or even by posting to the Web. And since Swift Playgrounds uses real Swift code, projects can be exported directly to Xcode and ultimately be turned into full-fledged iOS and Mac apps.

Swift Playgrounds is available on the App Store for free (starting on September 13, 2016). Swift Playgrounds is compatible with all iPad Air and iPad Pro models and iPad mini 2 and later running iOS 10. For more information including videos, images and demos, you can visit: www.apple.com/swift/playgrounds.

Hands on with Swift Playgrounds App for iOS 10 [Video] 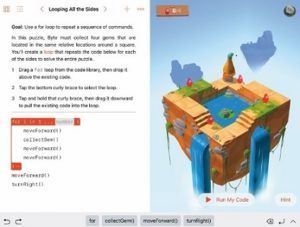