The Apple Computer. A truly complete microcomputer system on a single PC board. Based on the MOS Technology 6502 microprocessor, the Apple also has a built-in video terminal and sockets for 8K bytes of on-board RAM memory. With the addition of a keyboard and video monitor, you’ll have an extremely powerful computer system that can be used for anything from developing programs to playing games or running BASIC.

Apple Introduces the First Low Cost Microcomputer System with a Video Terminal and 8K Bytes of RAM on a Single PC Card.

Combining the computer, video terminal and dynamic memory on a single board has resulted in a large reduction in chip count, which means more reliability and lowered cost. Since the Apple comes fully assembled, tested & burned-in and has a complete power supply on-board, initial set-up is essentially “hassle free” and you can be running within minutes. At $666.66 (including 4K bytes RAM!) it opens many new possibilities for users and systems manufacturers.

You Don’t Need an Expensive Teletype.

Using the built-in video terminal and keyboard interface, you avoid all the expense, noise and maintenance associated with a teletype. And the Apple video terminal is six times faster than a teletype, which means more throughput and less waiting. The Apple connects directly to a video monitor (or home TV with an inexpensive RF modulator) and displays 960 easy to read characters in 24 rows of 40 characters per line with automatic scrolling. The video display section contains its own IK bytes of memory, so all the RAM memory is available for user programs. And the Keyboard Interface lets you use almost any ASCII-encoded keyboard.

The Apple Computer makes it possible for many people with limited budgets to step up to a video terminal as an I/O device for their computer.

No More Switches, No More Lights.

Compared to switches and LED’s, a video terminal can display vast amounts of information simultaneously. The Apple video terminal can display the contents of 192 memory locations at once on the screen. And the firmware in PROMS enables you to enter, display and debug programs (all in hex) from the keyboard, rendering a front panel unnecessary. The firmware also allows your programs to print characters on the display, and since you’ll be looking at letters and numbers instead of just LED’s, the door is open to all kinds of alphanumeric software (i.e., Games and BASIC).

The Apple Computer uses the new 1 6-pin 4K dynamic memory chips. They are faster and take U the space and power of even the low power 2102’s (the memory chip that everyone else uses). That means 8K bytes in sixteen chips. It also means no more 28 amp power supplies.

The system is fully expandable to 65K via an edge connector which carries both the address and data busses, power supplies and all timing signals. All dynamic memory refreshing for both on and off-board memory is done automatically. Also, the Apple Computer can be upgraded to use the 16K chips when they become available. That’s 32K bytes on-board RAM in 16 IC’s – the equivalent of 256 2102’s!

A Little Cassette Board That Works!

Unlike many other cassette boards on the marketplace, ours works every time. It plugs directly into the upright connector on the main board and stands only 2″ tall. And since it is very fast (1500 bits per second), you can read or write 4K bytes in about 20 seconds. All timing is done in software, which results in crystal-controlled accuracy and uniformity from unit to unit.

Unlike some other cassette interfaces which require an expensive tape recorder, the Apple Cassette Interface works reliably with almost any audio-grade cassette recorder.

A tape of APPLE BASIC is included free with the Cassette Interface. Apple Basic features immediate error messages and fast execution, and lets you program in a higher level language immediately and without added cost. Also available now are a disassembler and many games, with many software packages, (including a macro assembler) in the works. And since our philosophy is to provide software for our machines free or at minimal cost, you won’t be continually paying for access to this growing software library.

The Apple Computer is in stock at almost all major computer stores. (If your local computer store doesn’t carry our products, encourage them or write us direct).

All Apple products are assembled, and guaranteed to work. Tested. 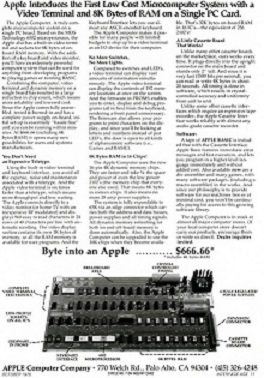