Main Site → About Apple → History of Apple → Apple I Computer

The Apple I computer was hand-built by Steven Wozniak and released by him and his friend Steve Jobs in April 1976. This first « pre-Mac » device developed by the Apple Inc. Founders was based on the MOStek 6502 chip, an 8-bit microprocessor that was designed by MOS Technology in 1975. At the moment, this chip was the least expensive full-featured microprocessor on the market.

Serial Numbers: Apple did not assign serial numbers to its first computer. Several remaining units however have numbered stickers affixed to them. Theses stickers may be inspection stickers from manufacturer/assembler.

Today, several dozens of Apple I computers have been confirmed to exist (up to one hundred), but less than a dozen of them have been verified to be in working condition. An Apple I computer was sold for $50,000 USD at auction in 1999. According to the website Vintage Computing and Gaming reported that Apple I computer owner Rick Conte was looking to sell the device and was expecting a price in excess of $15,000 US, in 2008, but he donated the unit to the Maine Personal Computer Museum in 2009. The same year a unit was sold for $17,480 on eBay.

In March, 2010, a computer belonging to early Apple Computer engineers Dick and Cliff Huston was sold for 42,766 on eBay; and in November 2010, an Apple I computer was sold for £133,250 at Christie’s auction house in London. However, the high price was due to the rare documents and packaging offered in the sale in addition to the computer, including the original packaging, with the return label showing Steve Jobs’ parents’ address, the original Apple Computer Inc ‘headquarters’ being their garage, a personally typed and signed letter from Jobs (answering technical questions about the computer), and the original invoice showing ‘Steven’ as the salesman. The computer was brought to Polytechnic University of Turin where it was fixed and used to run the BASIC programming language.

On June 15, 2012, a working unit was sold at auction by Sotheby’s for a record $374,500, more than double the expected price. This unit is on display at the Nexon Computer Museum in Jeju City, South Korea.

In October of the same year, a non-working Apple I from the estate of former Apple Computer employee Joe Copson was put up for auction by Christie’s, but found no bidder who was willing to pay the starting price of US$80,000. Following the Christie’s auction, the board was restored to working condition by computer historian Corey Cohen. Copson’s Apple I was sold on eBay for US$263,100.03 on April 23, 2015. On November 24, 2012, a working Apple I was sold at auction by Auction Team Breker for €400,000.

On May 25, 2013, a functioning 1976 model was sold for a record US$668,000 in Cologne, Germany. This particular unit has Wozniak’s signature. An old business transaction letter from Jobs also was included, as well as the original owner’s manual.

On June 24, 2013, an Apple I was listed by Christie’s as part of a special on-line only auction lot called, “First Bytes: Iconic Technology From the Twentieth Century.” The unit was sold for $390,000.

In November 2013, a working computer speculated to have been part of the original lot of 50 boards delivered to The Byte Shop was listed by Auction Team Breker $242,820, but failed to sell during the auction. Immediately following the close of bidding, a private collector purchased it for $330,000. This board was marked “01-0046,” matching the numbering placed on other units sold to The Byte Shop and included the original operation manuals, software cassettes, and shipping box autographed by Steve Wozniak. The board also bears Wozniak’s signature.

In October 2014, a working, early Apple 1 was sold at auction for $905,000 to the Henry Ford Museum in Dearborn, Michigan. The sale included the keyboard, monitor, cassette decks and a manual. The auction was run by Bonhams.

On December 13, 2014, a fully functioning, early Apple I was sold at auction for $365,000 by auction house Christie’s. The sale included a keyboard, custom case, original manual and a check labeled “Purchased July 1976 from Steve Jobs in his parents’ garage in Los Altos”.

On May 30, 2015, a woman reportedly dropped off boxes of electronics for disposal at an electronics recycling center in the Silicon Valley of Northern California, and they would now like to contact her. Included in the items removed from her garage after the death of her husband was an original Apple I computer, which the recycling firm sold for $200,000 to a private collector. It is the company’s practice to give back 50% of the proceeds to the original owner when an item is sold, so they want to find the mystery donor.

According to Wikipedia, on August 26, 2016, an Apple I prototype dubbed the ‘Holy Grail’ of computers was sold for $815,000 to winning bidders Glenn and Shannon Dellimore, the co-founders of cosmetics firm Glamglow, in an auction by Charitybuzz. The for-profit internet company that raises funds for nonprofit organizations declared that ten percent of the proceeds will go to the Leukemia and Lymphoma Society, based in New York. 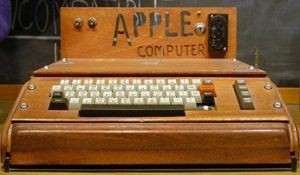