It is enclosed in a high-density polycarbonate frame, which is mounted on an easel-style stand with an integrated two port USB hub and an ADC (Apple Display Connector) for analog and digital video input\output. It also has USB data transferring and a power supply. Apple Cinema Display Original (22-Inch) is compatible with the “Gigabit Ethernet” Power Macintosh G4/400, G4/450 DP, and G4/500 DP. The wide-aspect-ratio, digital flat panel was a breakthrough, because it offered a full support for HDTV resolution, ultra-sharp focus all the way to the edges, and gorgeous industrial design. 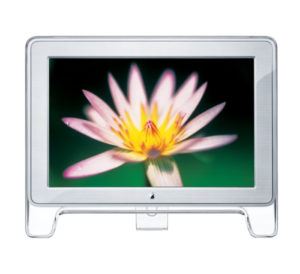