Vertical linearity bad (size of text differs at top vs. bottom of screen)

Video – Raster too dark, too bright, or washed out

Video – Out of focus

Video – Out of convergence (color bleeding out from text or lines)

Troubleshooting – Miscellaneous – Does not degauss

Troubleshooting – Miscellaneous – Erratic or no communication with ADB device

Displays smaller than 15 inches with tron-style CRTs typically have a single horizontal grid wire about one-third of the way from the bottom of the display image. This supporting wire, which is thinner than a human hair, stabilizes the aperture grill against shocks. The line is common to all tron-style displays and is not a screen defect. It cannot be adjusted out or eliminated by repairing or replacing display modules. 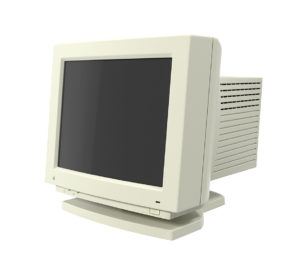