Features of the Macintosh Performa Series

The series was conceived when Apple decided to bring its computers into the home of an average user, with the idea that a child would experience the same Macintosh computer both in the home and at school, and grow to use Macintosh computers at work. At that time, Apple sold computers through authorized resellers, either brick and mortar stores or by mail order. Resellers sold Macintosh computers to professionals, who then purchased high-level applications and required performance and expansion capabilities. Consumers, however, purchased computers based on the best value, and weren’t as concerned about expansion or performance.

To satisfy consumer-level budgets, the Performa computers were sold bundled with home and small business applications. Most models were also bundled with a keyboard, mouse, an external modem, and either a dot-29 or dot-39 pitch shadow mask CRT monitor. Professional models were sold à la carte, with keyboard and mouse bundles chosen by the dealer, or sold separately. Monitors sold with higher end Macintosh models used Trinitron tubes based on aperture grille technology.

Software bundles included ClarisWorks, Quicken, a calendar/contact manager such as Touchbase and Datebook Pro, America Online, Apple’s At Ease child-safe interface, educational software such as American Heritage Dictionary, The New Grolier Multimedia Encyclopedia, TIME Almanac (on models equipped with a CD-ROM drive), Mavis Beacon Teaches Typing, or Mario Teaches Typing, and a selection of games such as Spectre Challenger, Diamonds, and Monopoly. These bundles were all pre-installed over a slightly customized version of the Macintosh system software.

The Performa marketing strategy failed, as a large number of models were intended to accommodate retailers, who could advertise that they could beat their competitors’ price on equivalent models, while at the same time ensuring that they did not carry the same models as their competitors. This created consumer confusion. To help consumers choose between the options available to them, Apple created “The Martinettis Bring Home a Computer”, a thirty-minute infomercial about a fictional family that purchases a Performa computer. Another factor was that people working at mass-market retail stores lacked the specialized training Apple offered to its dealers. Usually the Performa display models were poorly taken care of; the demo computers crashed, the self-running demo software was not running, or the display models were not even powered on. Apple tried to address the training issue by hiring their own sales people to aid the store sales staff, most of them recruited from Macintosh user groups. Despite this, however, many returned Performa computers could not be serviced properly because the stores were not authorized Apple service centers.

Most experts attributed the failure to retailers favoring the Microsoft Windows line, especially after the introduction of Windows 95. Computers running Windows were generally cheaper, and encouraged by manufacturer spiffs, advertising co-ops, and other promotion programs. In addition, many stores preferred to sell their own branded white box PCs.

The significant number of nearly identical models across its multiple hardware lines caused Apple to rethink its marketing strategy. The company eliminated the entire Performa line in the late 1990s, along with many of the professional models in favor of a “four box” strategy, comprising a professional desktop (Blue and White G3), professional laptop (PowerBook), consumer desktop (iMac) and consumer laptop (iBook). In the late 1990s, Apple focused on the store within a store concept, with Apple and related products displayed and sold in a physically separate location. 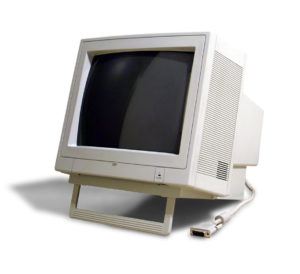