In the eighties, Apple pioneered the personal computing industry in the world with its computer. However, the company then stumbled, and many say it was because of its limited (or closed) approach, based on the high-end computers, while Microsoft (to give an example) flourished through its software designed for low-cost home computers. Apple learned much from those years, and in the nineties it became the wealthy market leader.

May 18, 1990: An Apple Macintosh with red diskette appears a few times.

March 6, 1991: In the lawsuit of Apple Computer versus Microsoft and Hewlett-Packard, Federal District Court Judge Vaughn Walker in San Francisco denies Hewlett-Packard’s request to declare Apple’s copyrights invalid. He also rejects Microsoft’s argument that portions of Windows are covered by the 1985 license from Apple. The judge agrees to Microsoft’s request to consider the copyright issue feature-by-feature, rather than on the basis of overall look and feel. (See also April 1991).

April 1991: In the lawsuit of Apple Computer versus Microsoft and Hewlett-Packard, Apple broadens its suit to include Windows 3.0. (See also March 6, 1991).

July 3, 1991: Apple Computer and IBM sign a technology sharing agreement, to integrate the Mac into IBM’s enterprise systems, to allow future RISC-based Macs to use IBM’s Power PC chip, to work together on common multimedia standards, and to co-operatively produce a new object-oriented operating system. Richard Shaffer, publisher of Computer Letter, comments on the Apple-IBM alliance: It’s like a surfer girl marrying a banker.

August 1991: Steve Jobs agrees with his NeXT company advisers to port the NeXTSTEP operating system to the Intel 80 x 86 architecture.

August 20 1991: Apple Computer and Adobe Systems sign a letter of intent for Apple to include Adobe’s font technology in future System 7 operating system.

August 28, 1991: The first email message is sent from space to Earth, sent by the crew of space shuttle STS-43 Atlantis, using a Macintosh Portable computer and AppleLink software.

September 1991: Apple petitions the FCC to allocate a 40 MHz wide band of frequencies for use with its personal digital assistants.

December 31, 1991: Apple announces that up to date the total of 7 million Apple Macintosh computers have been shipped.

January 22, 1992: At the first NeXTWORLD Expo, held in San Francisco, Steve Jobs announces that a version of the NeXTSTEP operating system will be made for Intel-based personal computers. Jobs also announces Turbo versions of NeXTstation, NeXTstation Color, NeXTcube with 33-MHz 68040, NEXTSTEP 3.0 OS.

April 1992: Apple Computer and Sharp announce an agreement to co-develop a personal digital assistant, based on Apple’s software and Sharp’s hardware.

October 1992: One year after the introduction of Apple Computer’s PowerBook, sales of US$1 billion make it the first personal computer to break that threshold. More than 400,000 PowerBooks have been shipped

November 1992: Top selling Macintosh computer game in the USA is Prince of Persia.

December 1992: Market share of personal computer shipments in the USA for the year: IBM 10%, Apple Computer 12-13.4%, Compaq 5.6%. Apple shipments of the Macintosh operating system for the year: over 6 million copies. 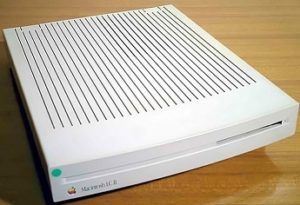