The Apple TV 4th generation was the first major update to the platform since the release of the 2nd generation Apple TV in September 2010. This model looks externally similar to the previous models, however, it runs on tvOS which is based on the iOS. It has its own third-party app library for a wide variety of native apps and games, rather than just a small number of pre-installed channels like earlier Apple TV devices.

The Apple TV 4th generation also includes a Siri Remote with Siri voice command support. A glass surface assures precise navigation. An accelerometer and gyroscope have been designed for advanced game controller options. While following the form factor of the previous models, this model is slightly taller in size. It features a touch remote which allows swipe-to-select functionality instead of the remote’s arrow button. It’s also equipped with integrated Siri support on the remote, with a built in microphone and accelerometer (IMU). The Siri button allows users to search across providers for content, access additional metadata, and use video/audio controls. The Apple CEO Tim Cook said at its first presentation, “The future of TV is apps.” He added that the Apple TV needed a modern OS.

Video uploaded by DetroitBORG on November 3, 2015

This is a comprehensive unboxing and review of the new A8 powered 4th Generation Apple TV. This includes a detailed setup and tour of tvOS and a demonstration of the App Store, Siri Remote, Gaming, and much more. 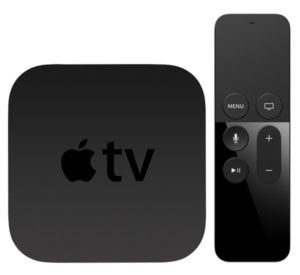