Apple Watch: How to Reset the Home Screen Layout

How to Rearrange Apps

On Apple Watch itself:

A Few Apps for Apple Watch

Slack: This app has become the go-to communication platform for tech and media businesses and start-ups. The iOS app provides a fully-featured Slack experience with file sharing, social media integration, as well as powerful search and archiving features, while the Apple Watch app doesn’t. The app focuses on what you want a watch to do, which is to notify you only of the things you really need to know about. That means, the same push notifications you’ve set for your iPhone, are able to be put on your watch as well, so you can move from watch to iOS without losing your train of thought.

Tweetbot 4: Mac and iOS Twitter client bar none. The developers have rightly assumed that if you have your phone in your hand, you won’t be using the watch instead, so they’ve concentrated on making an app for when you can’t or don’t want to pull your phone out of your pocket or purse, which is clever. The Activity pane shows you what’s happening in your feed, so if somebody’s followed you, or replied or tweeted you, you’ll see it in Activity. Tapping on the item opens the appropriate tweet or user page, and with tweets you’ll see icons for a quick reply, a retweet or a like. If the user pushes into the screen using Force Touch, you get an offer to create a new tweet, and both it and the reply option use Siri for dictation, so you can dictate a direct message, or follow/unfollow accounts from the app too.

Instagram: Like the most Watched versions of iPhone/iPad apps, the Instagram app is limited compared to its bigger sibling. For example, you can’t use it to take photos with your phone camera and upload them from the Watch, since snapping and uploading are still a remaining job for your iPhone. What this app does do, is show a shortened version of your Instagram feed, offering the most recent posts from people you’ve chosen to receive notifications about. (You can change that list in the iPhone app). Instagram works surprisingly well on your wrist. You can swipe through photos to view or like them, see recent comments and likes on your own photos, and send emoji replies to people’s posts.

PCalc: This app is a fantastically useful calculator and scientific calculator, but much more importantly, it prevents arguments in restaurants. Simply tell it how much the bill comes to, how many people are paying and how big a tip you want to leave, and the Watch app calculates how much each person should hand over. It supports watchOS 3’s Scribble feature too, so you don’t need to dictate or tap on a tiny keypad if you’ve downed that second bottle of wine. Alternatively, you can use the Digital Crown to enter the figure in the tip calculator. That’s not all the Watch app can do, though. It includes a converter for distances and other measurements, and if you Force Touch the app, you’ll see a Send To iPhone icon as well as the clear and undo buttons. And on the iPhone, the main app is a great tool for serious calculating (and quick sums: there’s a mini-calculator if you Force Touch the app icon). It’s not the cheapest calculator app, but it’s worth the money. 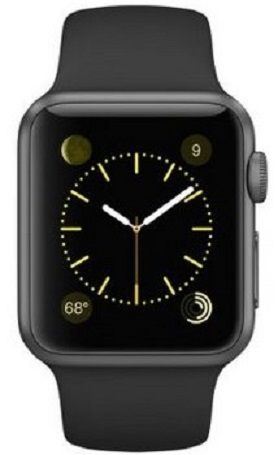