The Apple Cinema Display LED (24-inch) is meant to companion the laptops with small displays and a Mini DisplayPort (earlier Macs aren’t supported): the MacBook, MacBook Pro, and MacBook Air. It has an anodized aluminum casing with a slight bezel (but wider than that of its predecessor) and is mounted on an aluminum stand with an adjustable hinge.

The screen is covered with an anti-glare glass that is .75-inch-thick. The display also meets the Electronics Standards Association’s (VESA) mounting interface standard and can be mounted on a wall or an articulating arm. It is an active-matrix LED -backlit glossy display with IPS technology, and has a maximum resolution of 1920 x 1200 pixels, with an integrated three port USB hub, an iSight web-camera with a mic, as well as a 2.1 speaker system. It also has an octopus cable with three connectors (Mini DisplayPort, MagSafe, and USB 2.0) and therefore, can only be plugged into an Apple laptop.

Setting Up the Computer with the Lid Closed

To use the Apple LED Cinema Display with the computer’s display closed:

Setting Up Sound Input and Output on the Display

The display allowed the user to listen to movies and other videos, listen to music, play games with sound and listen to other multimedia files through the speaker system. The user could also use the microphone to record sounds, or talk with friends using the iChat feature. To manage sound input and output, go to Sound preferences:

To set up sound input on the 24-inch LED Apple Cinema Display:

To set up sound output on the display, do the following:

These sound settings are used whenever the computer is connected to the cinema display, and they remain in effect until manually changed.

The 24-inches Apple LED Cinema Display could use the built-in iSight camera and microphone to capture still images, video, and audio with applications such as iChat, iMovie, and Photo Booth features.

To set up the camera and microphone on display with iChat:

When the user leaves the computer’s display open, the user can mirror the same image on both displays or use the displays as an extension of your desktop. Too set up video mirroring or extended desktop, the user should use Display preferences.

How to Adjust the Color and Brightness

You can use your Apple Keyboard to increase or decrease the brightness of the display. It is also possible to use System Preferences to adjust the resolution, brightness, and color settings.

To adjust the resolution, the number of colors, or the brightness of the display: 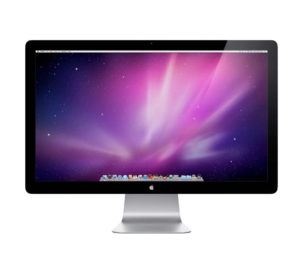