CPU stands for Central Processing Unit. It’s the heart, or rather the brain, of all the modern desktops, laptops, tablets, and smartphones. But what does it do? It processes information.

Just imagine an office room full of clerks in their cubicles. Every clerk is a transistor. The whole room full of transistors is a CPU. It processes the incoming instructions the way clerks used to process incoming papers and hand them out for further processing, or for their boss to see and evaluate the result. Right now, as I’m typing this on my old laptop, my transistors (clerks) are working, deciphering the instructions from the keyboard and turning them into letters. Meanwhile, other clerks are saving this very word file. The clerks are teamed to fulfill some specific tasks, while the whole load is shared among these teams called circuits.

For example, my clerks have loads of work to do. I print, browse, watch movies and I sometimes I edit videos. The instructions are coming in as an avalanche, threatening to bury my clerks. That’s why, they have to sort and prioritize incoming data. Imagine, that a clerk has “in” and “out” baskets on his or her desk to store processed papers. These baskets are cache memory. The larger the baskets, the easier the work.

Are you still with me? Good! Now, if an enterprise is large enough, one office room may not be enough. You have to hire more clerks and lease or build more office rooms. Here is where the multi-core CPUs come in. Every core is one office room with transistors (clerks) in it. Modern processors can have up to 16 cores, and some server models have up to 24 cores. However, the most common CPU models for PCs have no more than 8 cores.

So, we’ve learned that every core is an “office room” in which a task is performed. Do clerks from one room cooperate with their co-workers from the other room? But of course! There are two types of such cooperation. The task can be shared between the room so that it will be done faster. This process is called multithreading. But often, the workload is so large that every office room has to take on more than one task. This process is called hyperthreading. Top-class and mid-class CPUs feature both, the number of threads in hyperthreading specified in their documents. Top-class CPUs are capable of processing up to 4 threads per core.

Of course, the CPU has lots of work, as it also manages other parts of the personal computer or portable device. It controls operative memory or RAM, hard disks or solid-state drives (HDDs or SDDs), video and sound cards, and input-output ports. Back to our office room metaphor, clerks have landline phones which connect them to any other department or working shop of the enterprise. This way clerks can send and receive data, instructions or reports. These “landlines” are called buses. They have their own speed and topology that’s reflected in CPU specifications.

Of course, our clerks aren’t omnipotent, they can manage only so many departments. Thus, the capacity of RAM, storage type, and capacity are limited by a CPU model. Equally, HD video support or multithreading depends on CPU capabilities. This fact is mentioned in CPU specs as well.

What about clock speed? What is it and how does it effect a CPU performance? In a nutshell, the clock speed, or rate, defines a number of operations per second. The higher the speed, the faster the “clerks”. Picture the office room once again with a large clock on the wall. The speed that the clock ticks, dictates the speed of the clerk. The minimal period of time needed for one operation is called a clock cycle.

But processors with equal clock speed might not be equal in performance. Performance rate is the sum of many factors, CPU architecture being the crucial one. Just like office buildings differ, it matters, if the building is modern and light, or outdated with dark rooms and winding corridors.

Of course, you can make your clerks work faster by winding up the clock on the wall. The process of CPU boosting is called overclocking. But be careful, not every CPU is designed for overclocking, and you can exhaust your ‘employees’. In other words, the CPU life can be dramatically diminished through overclocking.

One last question you may have is: why clock speed is measured in frequency units – Hz, MHz and GHz. Because CPUs talk current frequency language. 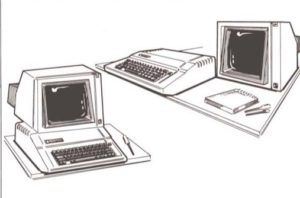