Through the second half of 2000 sales became slower both for Apple and the computer industry as a whole. But the things changed since Steve Jobs announced, in May 2001, that Apple would be opening retail stores across America, selling not only Apple computers, but mp3 players, video cameras, games and more. Apple also announced a major update to the iBook line. Later, in July 2001, Apple refreshed iMacs and G4, and terminated the G4 Cube, ending months of speculation as to how Apple would deal with the Cube’s resounding failure. iBook sold extremely well during the summer. In late October 2001, Apple announced the iPod, which was the first non-computer Apple product in several years and Apple’s first hardware addition to its digital hub strategy.

January 2001: Paul Somerson, vice president of Ziff Davis Development, predicts in the January 2001 issue of Ziff Davis Smart Business for the new Economy that Apple Computer will cease to exist in 2004.

March 11, 2001: The Fox Broadcasting Company airs the Futurama TV show. In the year 3000, a computer accesses the Internet, and loads and displays a video clip in a window looking very much like the Apple Computer Mac OS.

March 23, 2001: Apple issues firmware updates to make many of its Macintosh systems compatible with the Mac OS X operating system.

May 2001: Steve Jobs announces that Apple would be opening a number of retail stores across America, selling not only Apple computers, but various third-party digital lifestyle products, such as mp3 players, digital still and video cameras, as well as Personal Digital Assistants. Today, computer hardware purchased from the Apple Store online can also be configured-to-order with options that often include faster or larger hard drives and faster processors. User can find there refurbished Hardware, including lower cost, yet completely up to date (in terms of software), variants of the MacBooks, iMacs, Mac minis, iPods and other products. Also available are Apple Instant Loans, as well as gift certificates to both the Apple Store and the iTunes Store. Besides, it can sell products with automatic online discounts to “educational” users who include both faculty and students of higher education, and faculty of K-12 schools in addition to discounts for business buyers internationally and United States government employees. iPhone, iPod touch, and iPad come pre-loaded with apps from Apple. Among the most popular of these apps are the App Store, the Safari web browser, iTunes Store, Camera, and FaceTime.

May 13, 2001: The Fox Broadcasting Company airs the Futurama TV show. In the year 3000, a celebrity’s personality is downloaded from the Internet, and stored on a blank robot. The robot comes from a large box shaped like a 3.5-inch diskette box, with label on the box saying 10 BLANK ROBOTS / MAC FORMATTED. Later, a homes computer appears, looking just like the original 1984 Apple Computer Macintosh, with built-in monitor, keyboard, and diskette drive.

May 13, 2001: The Fox Broadcasting Company airs The Simpsons TV show. A personal computer appears, looking like the Apple Computer iMac.

July (?) 2001: Steve Jobs reportedly has a meeting with Sony executives. He assures Sony that he is willing to make an exception for Sony VAIO to run OS X. The negotiations later fell through.

September 2001: New revisions to the PowerBook G4 and iBook lines, the latter of which had sold extremely well during the summer.

October 2001: Apple announces its first non-computer product in several years, the iPod. The device was a small hard-drive-based digital music player, and represented Apple’s first hardware addition to its digital hub strategy. At $399, the iPod faced a similar challenge to the woeful G4 Cube: it favored style and form-factor over price. Apple was taking another gamble by charging a premium for the iPod’s superior design and small size.

December 2, 2001: The Fox Broadcasting Company airs The Simpsons TV show in the US. Two computers appear among stolen items; one appears to be an Apple Computer. 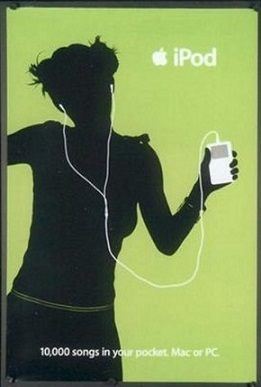