This year, 2006, Apple’s market capitalization reaches US460.56 billion dollars (annual amount, but in December 2006 alone, it was US$71.25 billion. Market capitalization equals the price per share of a company times the number of shares outstanding market capitalization (market and financial statement data provided by NASDAQ, BATS Exchange, SEC and Xignite Inc. Industry). In June , 2005, Steve Jobs announced that Apple would begin producing Intel-based Macintosh computers beginning in 2006. He also confirmed rumors that the company had secretly been producing versions of its operating system Mac OS X for both PowerPC and Intel processors over the past 5 years, and that the transition to Intel processor systems would last through 2006 and 2007. Rumors of cross-platform compatibility had been spurred by the fact that Mac OS X is based on OpenStep, an operating system that was available for many platforms. In fact, Apple’s own Darwin, the open source underpinnings of Mac OS X, was also available for Intel’s x86 architecture.

July-September 2006: Shipments of personal computers during the quarter: Apple 1.61 million.

October 4, 2006: Apple announces that the special committee of its board of directors has reported its findings after a three month investigation into Apple’s stock option practices. The special committee of outside directors, together with independent counsel and accountants, examined more than 650,000 emails and documents, and conducted interviews with more than 40 current and former employees, directors and advisers. Apple initiated this voluntary independent investigation after a management review discovered irregularities in past stock option grants. The independent investigation’s key findings are: • The investigation found no misconduct by any member of Apple’s current management team. • The most recent evidence of irregularities relates to a January 2002 grant. • Stock option grants made on 15 dates between 1997 and 2002 appear to have grant dates that precede the approval of those grants. • In a few instances, Apple CEO Steve Jobs was aware that favorable grant dates had been selected, but he did not receive or otherwise benefit from these grants and was unaware of the accounting implications. • The investigation raised serious concerns regarding the actions of two former officers in connection with the accounting, recording and reporting of stock option grants. The company will provide all details regarding their actions to the SEC. “I apologize to Apple’s shareholders and employees for these problems, which happened on my watch. They are completely out of character for Apple,” said Steve Jobs, Apple’s CEO. “We will now work to resolve the remaining issues as quickly as possible and to put the proper remedial measures in place to ensure that this never happens again.” 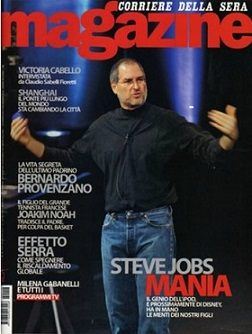