The term iDevice, generally refers to any Apple mobile or portable device however, depending on context, iDevices may refer only to products running Apple’s iOS operating system; such as iPhones, iPads and iPods, as well as some of the Apple’s TVs (Apple’s TV uses iOS, starting with the second-generation model). iDevice is an unofficial term which has been chosen, because in today’s world we associate the letter “i” with everything to Apple Inc.

MobileMe: MobileMe used to be an online membership service. Users paid for it annually and it enabled users to use their Mac from another location via the Internet, and it included e-mail, online iCal, Address Book syncing, syncing of a few preferences and capabilities, such as Keychain, online storage, remote access called “Back to My Mac”. The service synced information on Mac and Windows systems, so it used to be a good choice for users of multiple operating systems. It has since been replaced by iCloud since October 2011.

iCloud Photo Library: The iCloud Photo Library stores every photo and video you take, and keeps them up to date on all your devices. Any edits you make are automatically updated everywhere, so you can view a photo from last week, or last year – no matter where you are.

One to One Membership: One to One Membership was a scheme that Apple offered, which enabled users to get a private training class for learning how to use a new iDevice. For a fee, training typically took place in an Apple Retail Store, in the form of an individual meeting with an Apple Genius. Apple’s One to One service was retired in 2015, with the final renewals ending on December 17, 2015.

MacBooks and Secondhand Smoke: The MacBooks are sensitive to secondhand smoke. Apple warns that the warranty of your MacBook is voided if tar residue is found in your computer.

Mac OS X and Windows: As of 2015, MacBook was the only computer in the market that could run both Mac OS X as well as Windows legally.

No iPhone for a New MacBook Pro: It is impossible to plug an iPhone into a MacBook Pro without an adapter. Technically, the iPhone 7 was released before Apple launched a product that has no USB cables, but we still we have to admit, it’s kind of funny.

Touch Screens for Macs?: Why aren’t Macs being built with touch screens? Steve Jobs himself actually went on a tirade about this: “After an extended period of time, your arm wants to fall off. It doesn’t work. It’s ergonomically terrible. Touch surfaces want to be horizontal; hence pads.”

No More Apple Logo: The company removed the glowy Apple Icon from their Mac Pro in 2016, so that the computers now look more like the iPads and iPhones. Many users covered their devices up with another sticker anyway.

SkyLake and Kaby Lake Processors: The new MacBook Pro launched in 2016 does not have the newest Intel Processor. The newest Intel’s Processor is called Kaby Lake, and the newer MacBook Pros have the previous version known as Skylake. This may mean nothing in terms of noticeable performance, but to us, it is a sad fact. Apple switched from using Intel to an NFORCE chipset on the motherboard. The serial ATA controller is an NVIDIA MCP79.

How good is a Mac for coding?: Every Mac ships with well-integrated versions of the tools that MinGW tries to shoehorn onto a Windows machine. They have the ability to run code intended for a Linux server in a very Linux-like environment—PHP, Ruby on Rails, or Node js, are all web apps that will work on your Mac. MySQL and Postgres also run just as well on your Mac as they do on a server. Mac can work with a wide variety of powerful, mature programmers’ text editors; including TextMate, BBEdit, SublimeText, Atom, SubEthaEdit (with Google Docs-like live collaboration features) and more. Specialized developer tools like source control, GUIs (Cornerstone and Versions for SVN, Tower and SourceTree for git), file comparison, merge tools (Kaleidoscope), GUI design helpers (xScope), quick-lookup documentation viewers (Dash), and file transfer tools (Transmit) are also available and run well on the Apple machine. There are two competing virtualization tools; VMware Fusion and Parallels Desktop, for running OS X, Linux or Windows in a VM, as well as Boot Camp, which allows users to run Windows on the bare hardware. All of the Adobe Creative Cloud apps, plus some homegrown image editors (Acorn and Pixelmator), vector drawing tools (Opacity), video and audio tools (Final Cut Pro and Logic Pro), and HTML5 animation tools (Hype) that are much cheaper and can do some, or all of what Adobe offers. Then, there are tools like PaintCode, which lets you draw vector art graphically, and then export it as iOS or Mac-compatible drawing code, which I’ve never seen anywhere else. IDEs for writing code for other platforms, including Eclipse, JetBrains IDEs for many platforms, and Coda (for web design). The native IDE, Xcode, which fills the role of Visual Studio, but was made for Apple platforms. Some of these apps are available on Windows. The ones that are unique to the Mac will generally be deeply polished in a way that’s difficult to explain—the text editors, for example, are just as capable as Notepad++, but far more pleasant to use. All in all, OS X is a really excellent platform to write code on. If you’re not too closely tied to Windows, I would highly recommend it. 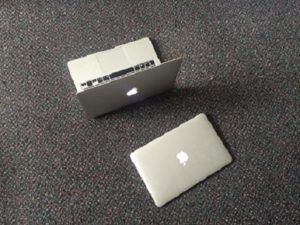