The fourth-generation iPad was marketed by Apple Inc. as iPad with Retina display, and colloquially referred to as the iPad 4. This model featured new and upgraded components such as the Apple A6X chip, and later the Lightning connector. The fourth-generation iPad was praised for its hardware improvements as well as the Retina display (also featured in the iPad 3). The iPad 4 comes with several pre-installed applications, including Siri, Safari, Mail, Photos, Video, Music, iTunes, App Store, Maps, Notes, Calendar, Game Center, Photo Booth, Contacts. Like all iOS devices, the iPad 4 syncs content and other data with a Mac or PC using iTunes. This model also an optional iBooks application, which displays books and other ePub-format content downloaded from the iBookstore.

The fourth-generation iPad featured new and upgraded components such as the Apple A6X chip, and the Lightning connector. This model shipped with iOS 6.0. This operation system provides a platform for audio-visual media, including electronic books, periodicals, films, music, computer games, presentations and web content. It was  the third device in the iPad line to support five major iOS versions, after the iPad (3rd generation) and the iPad 2. The iOS 11, which was announced on 5 June 2017, does not support the fourth-generation iPad due to hardware limitations.

Video uploaded by DetroitBORG on Nov 2, 2012 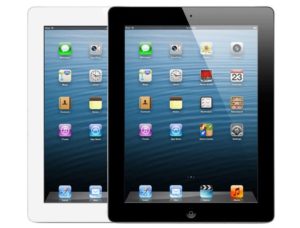