There were two iPod classic Color Display models to offer: a 20 GB or 60 GB model. The 60 Gb model was just the renamed version of the iPod Photo with revised software. The changes included the function of bookmarking within the podcast menu and the ability to display colored podcasts artworks. The 20 GB model stepped in place of the previous 20GB standard model and the 30GB iPod photo. Thus Apple merged two iPod lines in one, reasonably dropping the price in the process. That was the double win, for users could get a color-screened model with photo features for a monochrome price. The iPod classic Color Display supported viewing the photos to a music, displaying them on the external display or NV via an AV cable or dock (sold separately). Images from a digital cam can also be viewed on iPod immediately via the iPod Camera Connector (optional).

iPod is a music player and much more. As Apple states in its iPod User’s Guide (Instruction manual), with iPod, you can the following:

What You Need to Get Started

To use iPod with a Macintosh, you must have:

To use iPod with a Windows PC, the user must have:

A Windows PC with:

The user must connect iPod to his or her computer to transfer music and photos, and, in most cases, to charge the battery.

To connect iPod to the computer:

Apple iPod Classic. Video published by CNET on November 30, 2012. This iPod is classic for a reason, and delivers the best storage value of all the iPods. 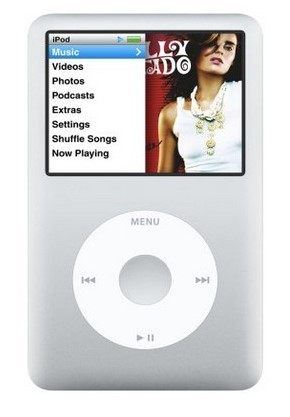