The Apple Monitor III is a CRT-based monochrome monitor made of green or white phosphor). This first in the Apple business line of devices, this monitor was manufactured and marketed by Apple Computer and made for the Apple III computer. It was also compatible with the Apple II personal computer, as well as other computers through a standard composite video input jack.

The Apple Monitor III, was introduced in May 1980, but not released until March 1981. Monochrome monitors were very common from the 1960s through the 1980s. They are still used in many ways today, like in cash register systems and so on.

Setting up the Monitor III

You will find it easy to set up and operate the monitor. The monitor features:

Here is the order of activities for setting up the monitor:

Before you begin, make sure that the computer is turned off and that you have the video cable and the monitor power cord on hand. When considering where to put the Apple system, keep in mind that the monitor requires its own electrical outlet. This means that you need at least two electrical outlets near your system – three if you add a printer or other device. Note that many people prefer to plug their computer equipment into a special power strip  which comes equipped with protection against surges in electrical currents.

About the Monitor’s Cables

Apple computers and monitors come with shielded cables. If you use other devices with your Apple computer, make sure the cables are shielded.

If the monitor has a separate power cord, plug it into the power socket in the back panel of the monitor. Make sure you get a firm fit. A loose connection can cause a flickering display.

Plug the monitor power cord into a power outlet. If you have not plugged in your other power cords, plug them in now. 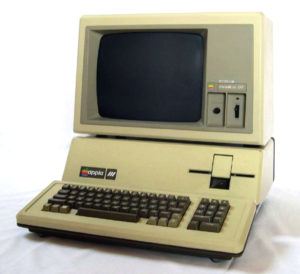