The iPod nano RED Special Edition is identical to the iPod nano 2nd. As to hardware, the crucial improvement was boosting the battery life up to 24 hours. The display also became brighter or as Apple put it, more vibrant. As to software, Apple engineers improved the search engine. Videoplayback remained unavailable. Apple declared, that the package weight was also 32% reduced within the environmental conscious politics of the company.

About the iPod Nano Battery

iPod nano has an internal, non-user-replaceable battery. For best results, the first time you use iPod nano, let it charge for about three hours or until the battery icon in the top-right corner of the iPod nano display shows that the battery is fully charged. If iPod nano isn’t used for a while, the battery might need to be charged.

How to Charge the iPod Nano Battery

You can charge the iPod nano battery in two ways:

If you want to charge the battery using the iPod USB Power Adapter, do the following:

Warning: Make sure the power adapter is fully assembled before plugging it into an electrical outlet.

Important note: If you have an optional iPod Dock Connector to FireWire cable, you can also connect iPod nano to a FireWire port on your computer or to an iPod Power Adapter (with a FireWire port) that’s plugged into an electrical outlet. You can use FireWire only for charging the battery and not for loading songs and other files onto iPod nano. 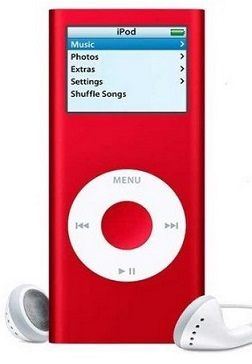