The iPod shuffle 4th Gen 2 Gb released in late 2012 is identical to the previous 4th generation model in everything except colors and operating system support. The 5 button operating scheme plus the VoiceOver action button on top. The player can speak the name of songs, artists and playlists in 14 languages and boasts the Genius Mixer function as well. That is, Genius can compile a playlist picking up similar songs. The housing is offered in seven colors – dark grey and silver with a black click wheel ring and blue, purple, red, pink, yellow and green with a white click wheel ring. There’s only one 2 Gb version for all colors with battery life up to 15 hours.

For the fourth-generation, Apple brought the iPod Shuffle’s buttons back, along with a few extra features that make the lightest, smallest MP3 player on the planet better than ever. Uploaded by CNET on September 10, 2010. 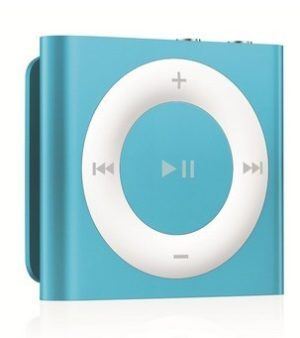