In 1983 Video Technology Company (VTech), based in Hong Kong, introduces the Laser 3000 personal microcomputer, one of the obscure and almost unknown Apple II clones. Laser 3000 computer was said to be 96% compatible with the Apple IIe when the Emulator Cartridge was installed. This device was reliable and suited perfectly many fans of the Apple II who wanted to play Chopper, Centipede, Frogger, Zaxxon and other games. You could also write programs or compose music with the Sound command. It was sold with the whole kit with the joystick, emulator and drive (the drive was detached, so was everything else). This computer had some special graphics modes and Sound options which were great for the epoch. You could hit ctl-break and read the programming… And a genuine Apple IIe price was at least double, so Laser 3000 represented good value for money. I owned it for about 4 years and it proved to be reliable.

Unlike the Apple II clones from Franklin and other companies, VTech reverse-engineered the Apple Monitor ROM using a clean room design rather than copying it. The company licensed an Applesoft BASIC-compatible version of Microsoft BASIC. Apple carefully studied the Laser 3000 but unlike its efforts directed at Franklin, Apple was unable to force this model off the market. Maybe just because it was not sold in quantities large enough to justify any serious effort to stop its production.

Despite its physical resemblance to the IIc, software sees the Laser 3000 as an enhanced IIe with 128K RAM. Central Point claimed that testing had found that only Choplifter, David’s Midnight Magic, and Serpentine did not run on the clone, because of Broderbund’s copy protection. InfoWorld found that the Laser 3000 was incompatible with 12% of 129 tested software packages, mostly educational software or games. Compatible software included AppleWorks, Quicken, Apple Writer, VisiCalc, Flight Simulator II, The Print Shop, and Where in the World is Carmen Sandiego?. inCider called the computer “amazingly Apple-compatible”, estimating 96% compatibility.

Programs that successfully ran on the Laser 3000 included F-15 Strike Eagle, Fantavision, WordPerfect, and The Hitchhiker’s Guide to the Galaxy, and the magazine noted that it was easy to install $25 upgraded ROM chips if necessary to improve compatibility. A+ similarly found that the computer was compatible with 28 of 30 popular Apple II programs, while only about half worked with the Franklin Ace. BYTE’s tests were less favorable. Most expansion cards worked properly but the magazine found “mixed results” with software compatibility, stating that graphics programs tested revealed flaws in the Laser 3000’s compatibility with both the Apple IIc and II+”. By comparison, Apple claimed in 1984 that the IIc was compatible with 90% of all Apple II software. The Laser 3000’s specs ensured that most major software companies tested their software on the Laser as well as on Apple hardware.

Licensing BASIC greatly reduced the amount of code that had to be reimplemented. Applesoft BASIC constitutes the largest and most complex part of an Apple II’s ROM contents. Microsoft made most of its money by keeping the rights to the software that it sold to others. Like IBM with PC DOS, Apple did not have an exclusive license for the Applesoft dialect of BASIC, and VTech was free to license it. Much Apple software depends on various machine code routines that are a part of BASIC in ROM, and it is likely that the Laser would not have been as successful had it not had compatible ROM entry points. 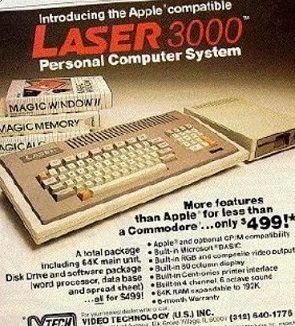