An endemic among the the Mac-using minority is a condition known as Apple Obsession Syndrome (AOS for short). While some AOS symptoms are serious, other symptoms are entertaining, from gratuitous Mac modifications, to ridiculous software. You can grab your iHymn sheet, and join us to pay homage at the high altar of Macdom.

Tired of using your iBook or PowerBook as a laptop computer? Why not turn it into an-singing, dancing, wall-mountable digital picture frame? A surprising number of people have done just this, and posted instructions online. Grab your glue gun and screwdriver, and head for: The obscure, the unusual, the exceptional.

The HollowScreen Project creates an interesting illusion. Take a digital photograph of your Mac’s immediate environment, and set it as the desktop background on your MacBook, iBook, or PowerBook. Then, cunningly position your laptop in such a way that the screen appears to be transparent. Disarmingly funny: hollowscreen.com.

SlashNot is a pasquinade of the computing supersite: slashdot.org, which, by the way, bubbles over with Mac news and discussions and is well worth a visit.

When you reach the site, dig your way through to the Mac news. There you’ll get the lowdown on everything from the iToaster to Apple’s attempt to sue Gwyneth Paltrow for naming her Daughter Apple Martin, to the rumors that Apple is in fact owned by Microsoft.

Apple Obsessive Syndrome (also called Apple Obsessive Disorder – AOD for short) is characterized by the overwhelming and uncontrollable affinity the person develops for Apple products. It usually begins with a first iPod purchase and swells with the release of every new generation of Apple products. AOD is usually confused with being “tech savvy”. Afflicted individuals are typically referred to as “Mac Enthusiasts”.

Affected individuals appear to be outwardly proud of their loyalty to the Apple brand. They are prone to bursts of self-reflection, in which they realize that their excessive fondness for Apple products is the most shameless demonstration of consumerism they’ve ever engaged in. Individuals suffering from AOD often feel a bit inane whenever an observer points out that they are way too consumed with and proud of something that someone else created. Individuals may exhibit anti-social traits (e.g., cutting a conversation short to listen to their iPhones, refreshing their Twitter stream excessively while in the company of others, pulling their iPad out in social settings for no apparent reason other than to demonstrate that they own an iPad).

These individuals frequently display reckless spending habits and a progressively alienating demeanor. They may also experience a loss of interest in sexual relationships, choosing instead to devote their attention to beating a particularly challenging level of Angry Birds.

Apple Obsessive Disorder is diagnosed when a person has acquired four or more products from the Apple family’ (e.g., iPod, iPad, MacBook, and iPhone) and consists of the majority of these symptoms:

If you long for the days when Macs came in hues such as tangerine, consider, consider handing your Mac over to a re-skinning service, such as www.colorware.com. However, you’ll have more fun doing it yourself. Get inspiration from a number of sites, and maybe even enter the annual Great MacMod Challenge: hackaday.com.

OS X may be slick and powerful, but can it match the retro charm of the OS featured on the Macintosh Plus, one of the first Mac computers to hit the market? Grab the Mini vMac emulator and decide for yourself.

Terminal Has a GSOH

So, you thought Terminal utility was strictly for the serious Mac-head looking to squeeze that little bit extra out of his or her machine via the use of the command line interface? Well, this techie-looking tool actually has a sensitive side. 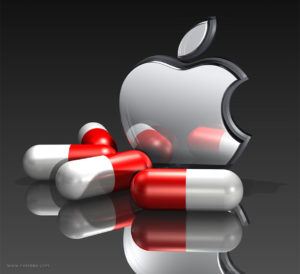